You and Lucinda Nicholson, that is so hot
—Brenda to Brandon

Brenda takes radical action after hearing bad news about Rocky; more people learn about Brandon and Lucinda; Steve bears the brunt of it when Dylan and Brandon nearly come to blows.

In the early morning, David and Donna are taking Rocky, the dog, out for a run, but they find the dog would rather have his belly rubbed and tires quickly. Brenda is still curious about who Brandon is dating. She realizes Kelly is just a cover up. Finally, Brandon tells her that he is seeing Lucinda Nicholson, but it is very important that she not tell anyone. Dylan and Kelly are having coffee at the campus Condor's Nest. While glancing at the college newspaper, they comment that Donna and Brenda are really caught up in the Animal Rights Movement. Dylan says he gets a little fed up with these zealots who equate "eating fried chicken with humans on Schindler's List." Dylan comments on a photograph showing Kelly and Brandon dancing at the "weekend retreat." Kelly quizzes Dylan about his financing of Lucinda's film documentary. She irritates Dylan by suggesting that he is backing down on lending her the money because she's a strong and opinionated woman. Kelly begs him to reconsider her project. From across the room, josh Richland notices Kelly giving Dylan a very warm, passionate kiss. As Kelly leaves, Richland quizzes her as to whether she is Dylan's girlfriend or Brandon's. She brushes him aside by saying that she and Brandon are just good friends. On the golf course, Steve and Brandon whack around a few balls. Steve asks Brandon what's going on between him and Kelly. Brandon answers that she is just helping him out with campus politics. At the animal rights meeting, the leaders - Jonathan, Janet and Allan are whipping the group into a fervor by telling more horror tales of mistreated experimental animals. Brenda and Donna volunteer to hand out leaflets to the rally. The activists hope to have the on-cam us test laboratories closed. At home Brandon tells his father that Steve and his father want them in the father/son golf tournament. Brenda arrives home all fired up and announces she's giving up the eating of meat. Kelly drops by to talk to Brandon about Dylan's backing of Lucinda's film. He's agreed to have dinner with Lucinda, but Kelly feels he resents the growing friendship between her and him. If Brandon were there as Lucinda's date, maybe Dylan would forget about the weekend retreat.

At the beach apartment, Donna and David can't get Rocky to eat or drink and he's breathing heavily. Lucinda is upset that Brandon has confided in Brenda and Kelly about their secret relationship. Brandon feels that Dylan will reconsider financing her film if he knows that the two of them have a relationship. A rap comes at the door, interrupting their discussion. It's Richland who asks to speak to Lucinda. Brandon quickly hides behind some of the editing equipment. Lucinda agrees to have an interview with Richland the next day. Lucinda tells Kelly that she and Brandon will join her and Dylan for dinner. While Donna and Brenda are passing out Animal Rights rally flyers, David comes by to report on Rocky's health. He lies to Donna, but tells Brenda the truth. The vet reports that Rocky has cancer. Andrea convinces Donna and Brenda to tour the lab facility and see how they conduct their tests. Andrea points out that one test being conducted on sleep patterns in cats could save the lives of thousands of human infants from death by SIDS. Rush Sanders stops by the KEG house to pick up his son, Steve. He wants to go to a golf driving range and practice. Steve is a bit put off by how important winning the golf game is to his father. He says he thought the golf tournament was supposed to be a fun time. The dinner at Dylan's house is all ready, with candles and fine china. Kelly has gone all out to impress Lucinda. When Dylan notices a fourth place setting he wonders who else is invited. Kelly tells him it's Lucinda's boyfriend, Brandon. Dylan is completely surprised. As Donna tries to give Rocky some medication, Brenda feels David must tell her the truth. David gently tells her that the dog has cancer and the vet feels he should be put to sleep. Donna is stunned. Over dinner the subject of financing Lucinda's film is discussed, but Dylan remains cool to the idea. When Lucinda and Brandon leave, Dylan tells Kelly how last weekend Lucinda tried to lure him into her bed. Kelly is shocked and angered. She grabs her things and rushes out the front door.

Brandon tells Brenda that the dinner at Dylan's did not go well. Brenda dashes off to her Animal Rights rally. Dylan calls Kelly but she tells David to tell him she's gone to class. In Lucinda's class, Andrea explains that Donna and Brenda are probably still at the rally. When Lucinda tries to move the class discussion away from the subject of fidelity, Kelly asks pointed questions about deceit and betrayal in relationships. Lucinda reminds Kelly that most primitive tribes share their mates with other members of the group. In spite of the radically vocal rally, the college trustees have voted to shelve the issue of banning the college lab testing facilities. The leaders become more vocal and angry. The rally begins to degenerate into a mob and one trustee is attacked. Donna and Brenda decide it is time to separate themselves from this group. At the Peach Pit, Andrea, Jesse, Brandon, Kelly and Steve are discussing a suitable name for Andrea's baby. Kelly and Brandon move over to a booth for a private conversation. Kelly tells Brandon about Lucinda making moves on Dylan at her house. Kelly tells Brandon that she feels she must tell Dylan that she and Brandon became very close last weekend at the retreat. As Donna holds an obviously dying dog in her arms, she begins to cry. Brenda on the other hand begins to blame the college laboratory for Rocky's death, saying they're not going to get away with it anymore. Brandon confronts Lucinda about her making moves on Dylan. She shrugs sit all off saying that what happened with Dylan does not change her feelings for Brandon. Brandon answers, that he is not sure what Lucinda means to him anymore. Brenda goes to Allan's house, eager to join in more forceful efforts against the college lab facility. They assign her the task as a lookout in the college building. Donna and Kelly discuss what the loss of a pet means to its owner. Donna says Brenda seemed to suffer the loss of Rocky too, but her emotions bordered on anger.

Brandon and Steve are telling Cindy about the golf tournament on the weekend, when Dylan drives up. He appears to be in an angry mood and asks to see Brandon alone. Dylan begins to vent his anger at Brandon about the Kelly retreat trip, setting him up with Lucinda to get her film financed and a host of other grievances. They are about to exchange blows when Steve steps in as peacemaker. For his trouble, Steve gets on the receiving end of Dylan's fist. Suddenly, all three are scuffling on the floor. It's all over in a few minutes and the close friends begin to laugh about their outburst of temper. In a darkened hallway, Brenda stands watch as several of the other radical activists go off down the corridor toward Lab #33. In the laboratory the group opens the cages and releases the test animals. Suddenly, the hall lights switch on and a half dozen F.B.I. agents rush in grabbing Brenda and the others. Dylan tells Kelly about his scuffle with Brandon. Kelly is rather flattered that the boys fought over her. A phone call comes from Brenda to Dylan. She has been arrested and jailed. He says he has to go post bail for her release. Kelly goes with him, but secretly wonders why Brenda didn't call her parents or Brandon for help.

Yeah, can you picture this, me standing there, quaking in the shadow of Lucinda Nicholson's gargantuan feminist intellect
—Damn, Dylan

Kelly, I am not dating Lucinda, we're just sleeping together
—Ooookay, Brandon

And I know Dylan. If all of us are there and we work him a little bit, maybe he'll come around
—Brandon about his 'friend'

Andrea, you're always the one who believes in standing up for a good cause
—Brenda 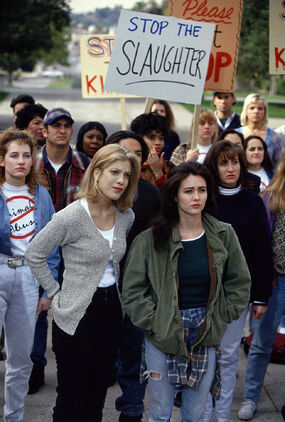 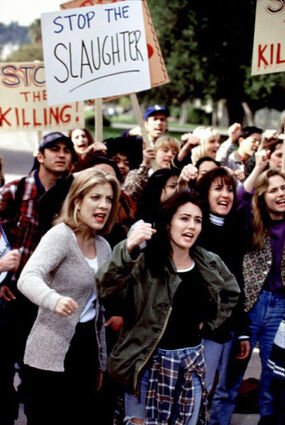 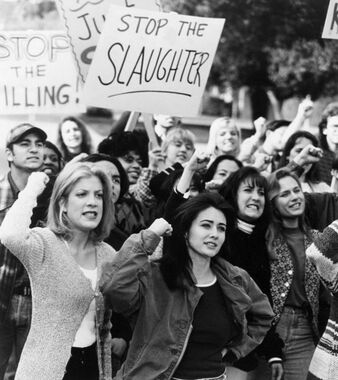 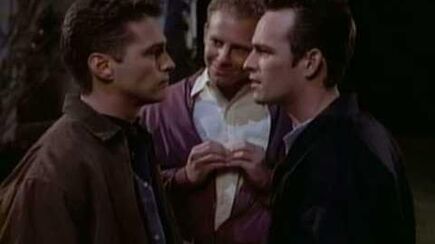 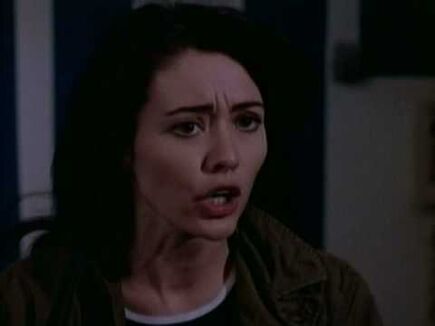