Daniel Attias
Anaconda is the 4th episode of Season 2 of Beverly Hills, 90210.

Brenda burns naturally, but Brandon and friends are in hot water when their after-hours poker game at the beach club is followed by a burglary.

Jim encourages Dylan to get in touch with his mother, but Dylan is too proud to ask her for financial help. Brandon, David, Steve and some friends hold an after-hours poker game at the beach club. Dylan joins them and is furious when he loses a lot of money. The club suffers a break-in, and Brandon's boss is questioned because of a past (unjust) robbery conviction. In spite of Steve's objections, Brandon comes to Henry's defense by telling the police about the poker game.

Dylan becomes the prime suspect after electronic equipment is found in his car. Brenda and her parents stand behind him, but Brandon becomes suspicious after finding pawn shop tickets. He wonders how cash-poor Dylan was able to afford a plane ticket to Hawaii. Dylan reveals that he has been forced to pawn his belongings from the family storage locker. He had finally called his mother, who paid for his ticket. The laundry service turns out to be the culprit. Dylan flies to Hawaii to visit his mother. Brenda suffers a severe sunburn when she falls asleep while trying to get a tan.

you've got that thing | BOBBY SHORT
the 'fancy' poker game 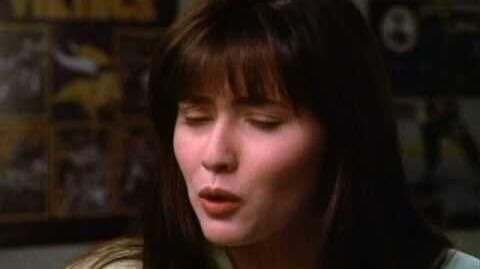