Brandon's first experience with tequila isn't as meaningful as his second, when he and Brenda host a party while their parents are away.

Brenda goads Brandon into taking her to a party at Donna's house. He voices his objections to alcohol, but Steve spikes his drink. He decides to go along with it so that he won't appear "uncool." Kelly has a few drinks and sleeps with Steve. Cindy catches Brenda with alcohol on her breath, but Brandon gets by unscathed. Jim and Cindy attend a weekend retreat, where they are forced to spend all their time with an overly friendly couple. Brenda convinces Brandon to throw a party, but they agree not to drink. Word of the party spreads, and it quickly gets out of hand. Brandon drinks heavily and kisses a stunned Andrea. Kelly dances with the lovestruck David to avoid Steve's advances. Brandon tries to drive to the store and smashes his car. He is arrested for drunk driving. Dylan takes him to an AA meeting and reveals that he is an alcoholic.

Brenda – I cannot believe it. I mean all Kelly talks about is how much she cannot stand him
Brandon – Yeah all women want is sex. It's disgusting

Brandon – Most people think I don't even have one
Dylan – Ah Brandon everybody has one. You just hide it better than most. You're not doing so good huh
―Dark side 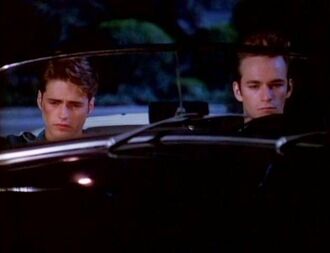