About to make summer's biggest splash!

Paul Sciarrotta • Chris Alberghini • Mike Chessler
BH90210 is a 2019 event series based on the original. It consists of 6 episodes and aired FOX television network in August and September 2019.

Having gone their separate ways since the original series ended 19 years ago, Shannen, Jason, Jennie, Ian, Gabrielle, Brian and Tori reunite when one of them suggests it’s time to get a Beverly Hills, 90210 reboot up and running. But getting it going may make for an even more delicious soap than the reboot itself. What will happen when first loves, old romances, friends and frenemies come back together, as this iconic cast – whom the whole world watched grow up together – attempts to continue from where they left off?[1]

In December 2013, Ian Ziering stated on Oprah: Where Are They Now? that he had attempted to sell a "loosely scripted" reunion special in which the original cast members appeared as themselves at a dinner party at his house, with a target airdate of September 2, 2010 to commemorate the show's numerical title; however, he failed to find a network interested in buying the project.[2] A few years later, Ziering indicated that Hulu had expressed interest in a revival series with the original cast in August 2016. [3]

In March 2018, it was reported that Garth and Spelling had partnered with CBS Television Studios to produce a 90210-related series in which they would play "exaggerated versions of themselves. [4] Then in December 2018, 5 of the original cast members were spotted together, reigniting rumors of a reboot featuring the original main 8 cast members (minus the Walsh parents and Scott Scanlon). Confirmation followed in January 2019 of a 'mockumentary-style' show with 6 confirmed original cast members (Shannen Doherty and Luke Perry were not signed on to appear at the time, however, Perry was stated to possibly appear as a guest star[5]). On February 27, 2019, it was confirmed that the 'mockumentary reboot' would air in Summer 2019 on its original network, FOX.[1]

Filming took place in Vancouver, between May 21 and July 31 2019,[6] with principal photography having commenced on May 27, 2019.[7] On April 26 it was confirmed that Shannen Doherty would also return to star in the series.[8] Doherty was revealed to also serve as an Executive Producer on the project.[9] On April 30, 2019, Gabrielle Carteris shared a photo of the entire cast gathered for the pilot.[10] The series is produced by CBS Television Studios.[11] Doherty's shooting schedule commenced a bit later than the rest of the cast, with her first day on June 13, 2019[12]

In May 2019, La La Anthony was confirmed to be joining the series as Brian's wife, Shay.[13] In June 2019, Christine Elise was confirmed to appear throughout the series.[14] Ivan Sergei and Vanessa Lachey were also confirmed in June to be joining the series as Toris' husband, Nate, and Jason's wife, Camille, respectively.[15][16] Carol Potter revealed her guest appearance in an Instagram post.[17] In July 2019, it was revealed that original cast member Jamie Walters would make a guest appearance on the series.[18] It was also announced that Natalie Sharp had been cast in a recurring role.[19]

The show has gotten mixed to positive reviews based on the first two episodes sent to press.[21][22][23][24][25] Variety's episode reviews span 3-5 stars, the rating having increased as the season has progressed.[26] The New Yorker published a positive review, citing the effective use of the original show's IP with the satire of the actors' personas as well as the industry.[27] As an aside, some reviews seem unable to refrain from '90s-imitating tabloid-gossiping about Doherty's relationship with the cast, though most reviews retain a level of professionalism.[28][29][30] 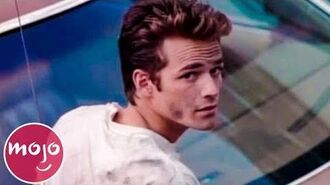 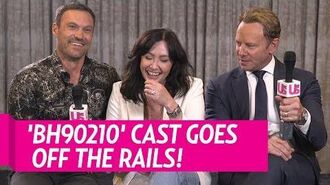 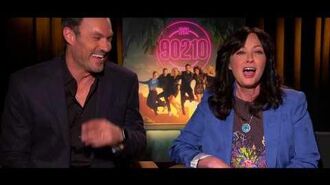 MiNDFOOD.com meets the cast of 90210
The Crew Is Reunited Opening Credits BH90210 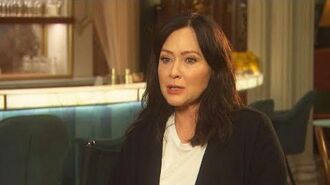 The Niche Celebrity Satire of “BH90210”
photo by Kristian Hammerstad

Retrieved from "https://90210.fandom.com/wiki/BH90210?oldid=86759"
Community content is available under CC-BY-SA unless otherwise noted.