The Beverly Hills Beach Club is a popular leisure resort where the gang hangs out during summer vacation. During the summer between sophomore and junior year, Brandon tries out for lifeguard, but ends up getting offered and taking a job as a cabana boy for the summer. Dylan's been coming to the beach club since he was little, as his parents were members and used to have their own cabana. During the summer between junior and senior year, Andrea gets a job as a summer camp counsellor. The summer after high school and before their first year at college, Brenda works there too and Donna joins Andrea as a camp counsellor.

The club has volleyball courts primarily occupied by Steve who is an avid player of the game. They also host an inter-club Volleyball tournament in the summer of 1992. 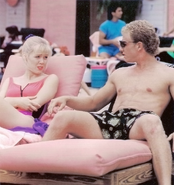