1st – Brandon kissed Andrea, but was drunk and she rebuffed him
2nd – They decided to have sex, but were thwarted by Kelly's surprise party/intentional sabotage and Andrea is the first to say afterwards that they should stay friends, which Brandon accepts
3rd – Brandon is high and kisses Andrea (pattern, anyone?)
4th – Brandon is jealous of Andrea's boyfriend and kisses her. Andrea is hurt and insulted
5th – Both have recently been dumped and both accuse the other of being on the rebound

Andrea, you are a remarkable person. You really are.
—Brandon[src]

Brandon & Andrea is a relationship on Beverly Hills, 90210, portrayed by Jason Priestley and Gabrielle Carteris.

Brandon and Andrea meet at The Blaze, which becomes the scene of many heated debates between the two of moral issues concerning the paper, always underpinned by their mutual, undeniable attraction which neither ever find the right time to truly act on. While Andrea is first considered a social outcast and Brandon quickly befriends 'in-crowd' people such as rich boy Steve Sanders and revered, rich loner Dylan McKay, the focus early on is how Andrea has an obvious crush on Brandon, but it goes both ways.

Brandon is the first to spontaneously kiss Andrea and both are incredibly jealous of their respective significant others. Brandon, particularly, often seems to have trouble expressing how he really feels about Andrea. The pairing seems to be bandied about quite a bit, with a bunch of near-misses in them finally getting together. It is not stated, but one can speculate that the two never did get together due to the necessity of the pregnancy storyline[1], and possibly Carteris's departure from the show a year following that.[2]

Andrea and Brandon first meet when Brandon seeks out a place on the West Beverly Blaze and encounters Andrea – the intense, dismissive editor-in-chief. Brandon's persistence and well-intentioned demeanour picks apart Andrea's defences and she agrees to let him work on the Blaze. When Brandon discovers Andrea living out of district, the two start a friendship as Andrea allows herself for the very first time, to put faith and stock in a peer from her high school, which is more or less a job to her. This begins a transformation in Andrea, as she starts opening up a bit to people and develop friendships at West Beverly.

Brandon and Andrea's friendship is intense from the very beginning, and only grows. Andrea becomes angry with Brandon during his fling with Marianne Moore, which could come off as jealousy – except it's hugely informed by Andrea's lack of friendships and vulnerability to others at West Beverly. As she says to him, she thought he was different.[3] She has a similar reaction when Brandon considers cheating on a test, prompting his equally impassioned response to her that he feels she's so invested in his morality, like they're in a relationship.[4]

While Andrea is aware of her growing feelings for Brandon[5], he is somewhat ignorant to his, but often expresses them when he's emotionally vulnerable. When Brenda decides to throw a party, with their parents away for the weekend, Brandon invites Andrea, gets tipsy and promptly kisses her, leaving Andrea mortified as she feels it's insincere, and Brandon's beer-fueled reaction to her rejection is heavy remorse, indicating that this was him daring to express his true feelings.[6]

They continue to work together and be close, Andrea jealous of the girls Brandon dates. Once the Spring Dance comes around, Brenda assumes Brandon will ask Andrea, but before she can hint at anything he says he's not going. Kelly then asks Brandon, although Brandon's not interested in her. When Andrea decides to show up anyway, Brandon (who continually remarks that he hates dancing) asks Andrea to dance and they slow dance.[7]

We may never see each other again
—Andrea to Brandon[src]

Once Brandon learns he and his family are moving back to Minnesota, Andrea decides to act on their feelings and suggest they sleep together. Brandon says yes and they plan to meet up at Peach Pit after closing. Andrea's nervous and asks Kelly for advice. Every kiss that they share is passionate and completely overwhelms both of them, implying (as well as their constant bickering) that they would experience great passion as a couple. Their plans are thwarted by a goodbye party for the Walsh family, arranged by Kelly (suspiciously also the only person who knew when and where Brandon and Andrea were meeting up).[8]

On the last day of school, Andrea serves cake at the paper and after everyone leaves, Brandon tries to talk to her about their thwarted plans. Where Brandon seems open to the idea of starting to date, Andrea desists, saying she thinks they should be friends, which Brandon accepts. Even though this was her decision, Andrea has a hard time coming down to the beach club and commiserates with Brenda, who doesn't want to face Dylan.[9] The experience strengthens their bond and Andrea feels okay asking Brandon to be a big brother to a kid, who they work together to help when it turns out he's being hit by his mother. When the gang go camping at Yosemite and Brandon has a near-death experience, his reaction afterwards is to take Andrea aside and give her a huge hug.[10] Andrea briefly dates her drama teacher before summer ends, which Brandon doesn't seem to learn about.[11]

When they return to West Beverly for their junior year, Andrea doesn't change her mind about dating Brandon, but still gets jealous of Brandon's romances with Emily, Tricia and Marcie. Brandon seems to have moved on after Andrea said she wanted to be friends, but is still aware of her jealousy. He never calls her on it, but also doesn't say that he's moved past the possibility of them as a couple, nor indicates that he has no romantic feelings for her. Andrea is short with the girls Brandon dates and always seems relieved when they don't stick around, but continues to be his friend too.

They hit some bumps in their junior year; once when Brandon unwittingly gets high on U4EA and his reaction to seeing Andrea is to start making out with her in front of both Emily and Steve, even though he's with Emily at the time. While Steve had encouraged Andrea to express her feelings for Brandon, she doesn't after being shocked by his behaviour and subsequently when he breaks up with Emily.[12] Another conflict arises when Brandon insults Andrea by calling her a hypocrite to be advocating for condoms in the school when she's never had sex. After getting some much needed guidance from his sister, Brandon apologises to Andrea, who's mortified to have had a guy she has feelings for say something like that to her.[13]

Ultimately, their conflicts only strengthen their bond as they grow closer. Andrea also confides in Brandon her worry that she's not part of the gang, which are finally allayed when she realises she was invited to Kelly's mother's wedding, along with everyone else. She tells Brandon that she's different and he replies, that's why all her friends like her.[14]

As the summer before their senior year begins, Andrea starts working at the Beverly Hills Beach Club as a camp counsellor. At first, Brandon acts like she'll be a hindrance to his romantic prospects, but comes to realise it's actually the other way around when he learns that Andrea's started dating the former editor of The Blaze, Northwestern soon-to-be sophomore Jay Thurman.[15] Despite his self-aggrandising notion that Andrea is pining for him, he doesn't start dating anyone new but finds himself jealous of Jay and wanting to spend time with Andrea. When Brenda leaves for Paris, Brandon eagerly seeks out Andrea at the Beach Club, asking if she'll come with him to say goodbye. Andrea congratulates Brenda and tells Brandon to say bye for her, elatedly saying she has plans with her boyfriend. She leaves and Brandon looks on after her, disappointed and, it seems, a bit jealous at seeing Andrea with Jay.

Andrea, meanwhile, is happy and enjoying her time as camp counsellor at the beach club. When Jay asks Andrea to come to the RNC in Houston, she's elated and excited. Brandon, however, is nervous and decides to make a cocksure move on Andrea, who is insulted and furious at his assumption. After consideration, Andrea decides not to leave the summer camp and she quickly forgives Brandon, indicating that she has moved on while he has not. Brandon apologises and thanks Andrea, impressed by her capacity to forgive him. Jay does ask whether Andrea is staying because of Brandon, but Andrea assures him that Brandon has nothing to do with her decision to stay in Beverly Hills for the summer.[16] Jay leaves for Houston and they stay in a long-distance relationship, while Brandon moves on to a brief love triangle with Steve and a volleyball player named Brooke. Andrea continues her work at the beach club and watches the Volleyball Tournament with Brandon.[17] Brandon helps Andrea teach Cameron how to fly a kite at the beach. At one point, Cameron disappears and Andrea is freaked. She interrupts Brandon kissing Brooke to ask him to help find Cameron, but it turns out he was just in the bathroom. Cameron tells Andrea to 'mellow out' and Brandon teases Andrea, telling Cameron it's 'good advice'.[18]

Brandon and his parents throw a welcome back party for Brenda and Donna, where everyone's invited. Andrea breezily talks to Steve about how close Brandon and Brooke have gotten and Steve asks if she's jealous. Andrea doesn't seem so and just says no, asking Steve if he is, re: Brooke. Andrea tells Steve that things are changing. Brenda arrives and they all welcome her. The following day at the Beach Club, the gang participate in a sandcastle competition, Andrea working with the summer camp kids. Brandon gets into numerous fights with Brooke, who, he discovers, is a racist. He tries to smooth things over with her when she protests his labels, but when Brooke makes a comment about how she doesn't understand why Andrea works with the kids because all Jewish people are rich, Brandon is done and break up with Brooke. At the End Of Summer Party at the Beach Club, Brandon toasts Andrea and the kids winning the sandcastle competition.[19]

Senior Year rolls around and with it, a new faculty advisor for The Blaze, who wants to shake things up by making Brandon the new editor.[20]

living in the U.S.A. | STEVE MILLER BAND
brandon gets jealous of andrea/jordan

Andrea – Brandon, do you think I'm a geek for coming to this dance by myself?
Brandon – No not at all. We never get to slow dance in the newsroom[7]

You never seize to amaze me
—Brandon to Andrea[src] 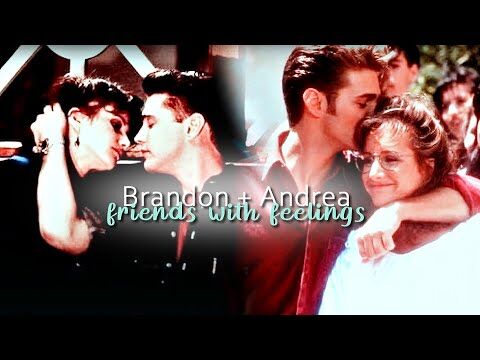 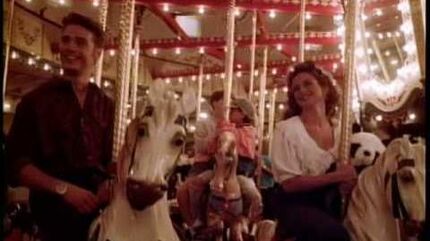 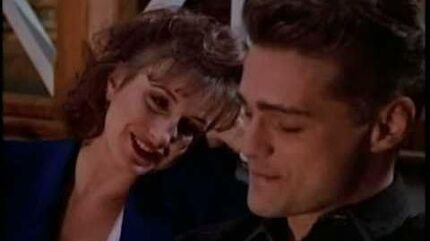