Brian is a great dad and husband; taking a step back so that his wife Shay could give it her all to music. But now years later, he feels like no one sees him, and instead see him as someone to get closed to, so they can be in Shay's circle. He is also the kind of friend that will answer a call when someone like Ian needs some support.

Brian is first seen flying on a private airplane talking to his wife Shay. He is reminding her that their son Bryce has a playdate the day after. While talking with Shay, he says that because it’s a 90210 event, it will be a thunderdome of girl drama. As the gang's all hugging, when it comes to Tori, he awkwardly pats her on the arm and just says “Hey Tor”. Later, he is seen looking nervously at where the gang will be sitting and confides in Tori that he’s a bit stressed. He reveals that he hasn't done anything of the entertainment side of things for 20+ years, and admits he doesn’t want to say something stupid and look like an idiot. Brian seems to be disappointed, but not surprised when the girl asking a question to him, is not about him but regarding when Shay’s new album will drop. A younger fan says that he’s been watching the show with his mom, and that he noticed that David was always kind of an outsider. He asks Brian if he was like that as well, to which Brian laughs and responds affirmatively.

Later, he tells Tori that Shay is handling the kids so well that Bryce had to be bribed with backstage BTS tickets to say hi to him. After some drinks with Tori, she asks him if he ever misses the spotlight. He says that even if he did, nobody really misses him. Upon his arrest with the rest of the gang however, the press dubs him 90210hhh Daddy! After he sees how many likes the news of his arrest got and the comments talking about him positively. He calls his agent Jeff and tells him he is ready to get back to work. He asks if there any guest spots he could do. [1]

When Tori tries to convince Brian to get on board, he tells her he can't because he’s trying to do movies now, not playing a middle age white rapper. She talks about how “no” didn’t stop her dad, and talks about how being persistent lead to Charlie’s Angels being created. Later, he is seen auditioning for a movie that will film in Atlanta. He doesn’t feel like he did a good job, but the guy in charge of his audition asks him how soon he can be in Atlanta and welcomes him to the cast. However, he soon asks Brian to say hi to Shay for him. Later, Tori is talking with Brian and congratulates him on the getting the role in the movie. He tells her that he won’t be doing it because all they really wanted was Shay. When he talks to Tori about the ordeal, she tells him that is precisely why he should do it; to prove them all wrong. But he’s not so sure that they are in fact wrong. When he’s with the gang doing their community service, he says that this time around he wants them all to be equal partners. He is later seen inside his home when the bell rings. Brian is the first of the gang to receive a package addressed to him that’s been left behind. When he opens it, its revealed to be a David doll whose head falls off.[2]

Brian is next seen interviewing Zach for the assistant position. He asks him if he knows him from somewhere since he seems rather familiar. Despite Shay’s apprehension, Brian hires Zach. [3]

He is next seen inside a limo reading through some comments online. He calls some of his fans nice but horny. Though Shay stops attention to what he's saying after she finds out someone leaked her song. Later, while talking with Shay after she’s talked to her stylist, he sticks up for Zach. Then at the first table read, he asks Anna why David is shirtless in every scene if he’s a lawyer. At the script re-writing session, he eventually comforts Tori and talks about how he knows that since they met, she feels like she doesn’t measure up but he tells her that she’s in a league of her own. Eventually Shay lets him know that she did some digging with a private investigator. Which reveals that Zach was at the reunion panel the gang were. Not only that, but Brian is shown pictures of Zach's apartment, which shows Brian's missing wallet and board full of information on Brian and Beverly Hills, 90210. When he confronts Zach about it, the latter confesses he wasn't planning to do anything bad. He just wanted to get to know his dad.[4]

After the bombshell afew days earlier, Zach finds Brian at craft services and Brian apologizes to the younger man for being radio silent for the past two days after finding out Zach is his son. He tells Zach he just needed a couple of days to process it all. When Zach asks Brian if Shay is pissed, he tells him that he hasn’t told her yet. He tells Zach that given the circumstances, it would be too weird to still have him as his assistant. Zach seems genuinely upset over this but tells Brian that he had been expecting to be let go once the truth came out. But Brian then jokes that he can pull some strings around the zip code and get him a PA job on the set. He is next seen skating around with Brian and when asked by Brian how long he has been doing it, Zach says about a year.

Brian later throws Vanilla Ice’s name as a possible enemy targeting him. When asked for more, Brian says that Vanilla Ice knows the reason. Then in dealing with Zach, he is dismissive and not fully paying attention to Tori who is nervous to do the sex scene with him. When Jason lashes out at Zach, he defends his son and sticks up for him. Later, feeling inspired by Gabrielle coming out to them, he says he too wants to come out (to which Tori says that it all finally makes sense). He introduces Zach to the rest of the cast as his son. Then as they finally shoot the Donna and David sex scene, he ends up getting aroused and apologizes to Tori about it. [5]

At the wrap party, Shay is not there and Zach apologizes to Brian because he feels like he’s inadvertently caused Brian to have problems with Shay. He says that he knows Shay doesn’t trust him, but Brian tells him it’s more like she is guarded because she has to be. Later, Ian tells Brian that Anna doesn’t want a relationship, that she’d rather have a no strings attached. Shay eventually comes clean to Brian about having her investigator do a DNA test on Zach, which revealed he is not Brian’s son after all. Brian gets understandably pissed because she went behind his back, and proceeds to tell her how this was more about her being unable to control this specific situation… And that ultimately, he doesn’t even recognize the person in front of him. At the upfronts, Brian confesses to Tori that he feels like Shay doesn’t appreciate him enough, and Tori says the same thing about Nate. The two cheer each other up by telling the other they appreciate them. He also thanks Shannen for bringing Zach as her plus one and says that he really wants to be there for Zach even if he is not the father. Shannen tells Brian that biology doesn’t matter and if he wants to be a father to Zach, then be one; regardless of what Shay says, he should follow his heart. Brian and Tori have another moment, where he asks her if she has ever second guess her own marriage. That maybe he should have married someone who was a better fit.At last Christine reveals that the 90210 reboot was picked up. However, because the network has no money, they will shoot in Canada, where the pilot will be re-shot, Anna is being replaced, they are also bringing in an entirely different guest cast. But unfortunately, this also means that the network can’t afford to bring back all of 7 of them.[6] 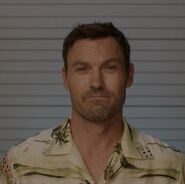 Mugshot in The Reunion