3
Camille is a recurring character on BH90210, portrayed by Vanessa Lachey.

Camille is a hardworking woman, who comes off as a bit duplicitous. She seems to have a somewhat cold personality, such as when Jason texts that he misses her, and she replies that he needs to keep his eyes on the prize because he has a lot of image rehab to do.

Camille is first seen talking to her husband Jason telling him he did this to himself, when he can't believe he is being forced to attend the 30th anniversary of for the series premiere of Beverly Hills, 90210. She tells him it’s her job as his publicist because no one is going to want to finance the indie film of a rage filled director who punches out his lead actors. Later, she texts Jason to let him know he did great on the panel, and that there’s lots of buzz. When he replies that he misses her. She tells Jason that the gang is everywhere after their brush with the law, with one website dubbing them Ocean’s 90210, which she says can be spun in his favor. Later, when Jason is about to confess to her that he cheated on her with Jennie, Camille tells him that she’s pregnant. [1]

After Jason laughs at the idea of doing a reboot, Camille admits that reboots are hot right now. She asks him to at least think of the possibilities. Such as having Brandon Walsh & Kelly Taylor back together. She tells him that people would eat it up. But more important, with their family expanding, she thinking having a a steady acting gig could be perfect. Shortly thereafter, she gets a text message that has getting up and going outside their house. It’s soon revealed that she is being blackmailed by Jack Carlisle in order to keep her dirty secret. [2]

In the morning, Camille is seen coming into the house after what appears to be her returning from a business trip. Jason confronts her about her infidelity, and she realizes that the ruse is up. She comes clean by telling him how it was only one time. She calls her sleeping with Jack Carlisle an accident that she regrets. She subsequently blames it on having had one too many kamikazes and was under a lot of stress with the Charlize movie. Which made it easier to give in to temptation. [3]

When the whole BH90210 gang is going to Jason's club to do the rewrite on the script Jennie asks Jason where Camille is. He reveals that she is at home resting since the first trimester is tough. [4]

Jason confesses to Jennie that he’s thinking about leaving Camille because he doesn’t think he can raise another man’s baby. Later, after they wrapped the David and Donna sex scene, Camille calls Jason multiple times. But he hasn't picked up. Jennie finally answers his phone, and tells Jason he really needs to take this call. She reveals that Camille is in an ambulance, and Jason rushes out. [5]

Beginning of The Reunion Episode

Towards the end of The Reunion Episode 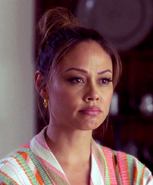