Christine comes across as a self-assured, direct and tough businesswoman, who takes a job as the show producer for the Beverly Hills, 90210 Reboot. She comes in to the room prepared to show who's in charge and has an eye on all players at all times. Christine calls the cast narcissistic and commends them playing it up for tabloids at their community service, indicating she's a very cynical and single-minded, PR-focused person and someone who's more than capable of keeping the cast in check.

She is first seen coming in as the surprise guest to the pitch for the reboot. Its revealed that she is going to be executive running the show on a day to day basis. She tells the gang that she think therapy is a great idea. She thinks each and everyone of the BH90210 gang should explore their narcissism, their neuroses, and their pathological self-absorption. She tells them to embrace it because it’s gonna make for great television. [1]

Christine is next seen sarcastically asking Tori if the latter has reached out to Joe E. Tata, and if maybe he’d like to be the new CEO of Fox. She then tells Tori that the latter forgets she was on the show too and knows how they all really are. She then says how unlike the rest of the cast, she actually grew up. Sometime later, Christine is seeing talking with Gabrielle about Andrea's sexuality and goads her into admitting it's really about her. At the place where they will recreate the photo shoot from Season 2, she asks where Tori is. When no one answers she then remarks how she picked the wrong week to quit vaping. Upon seeing Tori coming in with Shannen, she is ecstatic. [2]

Christine next seen while out for drinks with Gabrielle, though she seems to be under a lot of stress. She talks about they are about to shoot in three days, but they are still having problems with the scripts and all the PR blitz is about to begin. She reveals that she doesn’t do vacations when asked by Gabrielle what her dream vacation would be. Ultimately the date between the two is rather awkward since this is Gabrielle’s first date with a woman, and all Christine is able to talk about during the date is work related stuff. Later, she tells Gabrielle she could learn a thing or two from some of her cast mates whom she calls brilliant social media whores. Eventually she admits to Gabrielle that she thrives on chaos, but that this whole reboot might be her Waterloo. The two almost kiss before Gabrielle pulls away saying she wants to do it right and that right now she’s a bit too buzzed for it. [3]

Some days later, she clears the room so that only actors are on set, and lets them know that no one wants to insure them when there’s an active threat out there. Tori says they don’t need insurance, but Christine says they do since the diner is one of the only sets that didn’t burn down in the fire. Gabrielle asks her who the company is and suggests calling them. She calls them delusional and tells them that they are being forced to shut down. So they have until the end of day to clear out of their trailers. Christine goes onto say that she just came from telling Jason the news and that he took it very well. Which is a lie because he’s shown ripping stuff around his office. She also says that there’s an active HR investigation since this is 2019 and it could be a disgruntled employee because there’s a zero tolerance policy on inappropriate behavior. Which leads the rest of the cast to say how they miss the 90’s. She tells them that they have professionals looking into this matter, but if they want to find out themselves she jokingly tells them to do so and calls them the Scooby Gang.

Later Gabrielle follows Chris into her office, and asks if she is ignoring her as of late. Christine says no, but that given all this HR stuff, things have gotten a bit complicated for them. She says that given the MeToo movement, Fox cares about who she sleeps with. So she needs Gabrielle to sign a consent form saying she consents to having a sexual relationship with her. At first Gabrielle is apprehensive, but she tells the gang about dating a female co-worker though doesn't namedrop Christine. [4] 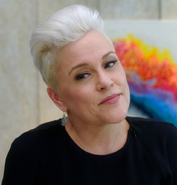 Retrieved from "https://90210.fandom.com/wiki/Christine_Elise_BH90210?oldid=82353"
Community content is available under CC-BY-SA unless otherwise noted.