Clare and David meet at CU, sharing an 'Intro to Media' class and immediately start flirting. After an awkward run-in, Clare learns that David is Donna's ex and he learns that she lives at the Beach House, in his old room. In spite of their attraction, David is hesitant to start anything because he doesn't want to hurt Donna any more than he already has. However, when Donna moves on they start dating and are together for 5 months. They break up as they are always arguing and admit they both have feelings for someone else. Clare starts to regret that decision and they get back together. They stay together for about a month during summer, until Clare dumps David. Following this they are in the same friend group and seem to get along fine, although they don't really spend time together.

In computer class, David spots Clare busy at her computer screen. He introduces himself and mentions that he has seen her in his Media class. David asks if she would like to help out at the campus television station. Clare smiles and says that she would like to. Later at the beach apartment, Donna quizzes Clare about this "cute guy" she met in Media class. Clare is reluctant to say too much about him yet. Clare and Donna join CU TV where David shows up. Clare waves to David and tells Donna he's the guy she was talking about. Donna gives a kind of "I might have known it!" look, and tells Clare she's welcome to him. Donna turns and leaves as David crosses to them. He is surprised to hear Clare has moved into his old room at the beach. Later on, David stops by to visit Clare. She tells him that both Donna and Kelly are out for the evening. David feels a little uncomfortable being in the apartment where he spent so much time with Donna. David is getting cold feet about having sex with Clare and she says it's best he go, saying that she's "not very good at being good”. The next day, David and Clare are working together on their video project and have agreed to keep their relationship platonic, for the present. Donna tells them things are all good and introduces her new guy.[1] As Donna moves on with Griffin, it's clear David still has feelings for her, but he also likes Clare, who tells him that they don't have to feel guilty now and kisses him while they're editing. At Steve's first After Dark party, Clare and David go together. David is looking at Donna and when Clare calls him out on it, he focuses on her and they have a good time. When David later tells Donna he's happy for her and Griffin, she teases him about him and Clare and the three of them are okay.[2]

Clare and David become a couple and plan to have a romantic evening together. They make out in her bedroom and when Clare leaves the room briefly, David finds a pair of handcuffs and cuffs himself to the bedpost. But when Clare returns, she informs David she lost the key. Just then, there's a knock on the front door. Clare opens it to find her father, Chancellor Arnold, who wants to have a look at her new apartment. Chancellor Arnold wants to see Clare's bedroom. She says it's a mess and has to straighten it up first. In the bedroom Clare calls a locksmith and tells him to rush over. Then she throws a comforter over David and tells him to lie absolutely still. The Chancellor comes into the bedroom and, luckily, does not notice David. Clare and her father then rush out to dinner, leaving David alone until the locksmith arrives. With nobody home to let the locksmith in, David is stuck on the bed until Clare returns much later.[3]

One day in a lecture hall at California University, David arrives to class mid-lecture as the professor shows slides of UFO sightings. Clare, already in class, is very intrigued by UFOs. They decide to go on a trip to the desert to scout for UFOs. Out in the High Desert, Clare and David stop off at a local bar, which is decorated in a UFO motif. The bartender teases David for asking naive questions about aliens, and Clare becomes angry with David for not taking this expedition seriously as she really believes in UFOs. Out in the desert at night, Clare and David sit at their campsite and argue further about UFOs. They see strange lights on a hilltop and, with camcorder in hand, make a mad dash across the desert to see what they hope is a UFO. But, as they scale the hill, all they find is a satellite dish. Clare is bitterly disappointed. Later, back at their desert campsite, David and Clare are kissing so intensely, that they do not notice the fights of a UFO hovering above them in the nighttime sky. They sleep together for the first time.[4]

After David attends an intervention for Dylan, Clare tries to get David's mind off the long session at the Walsh house by clowning around in front of the video camera and recording them kissing. They have sex and it is on tape. They later discover that it's missing. When Donna arrives home from her parents, David and Clare asks if she has seen their tape, the one that was labelled,"Air Check". Donna says she left it with her parents to watch. Clare and David are mind-boggled. Donna manages to retrieve the tape once they tell her what's actually on it, but not before Dr. Martin sees a snippet of it.[5] 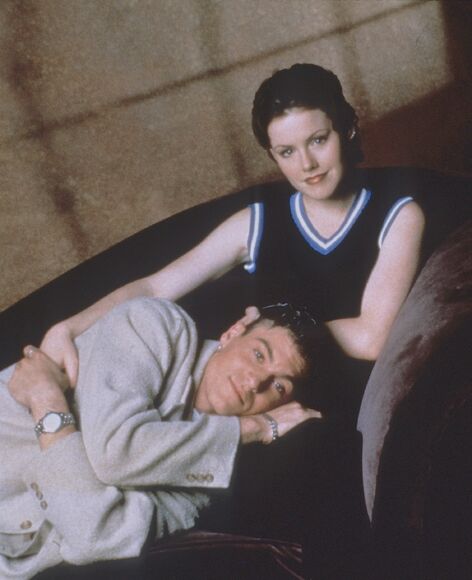 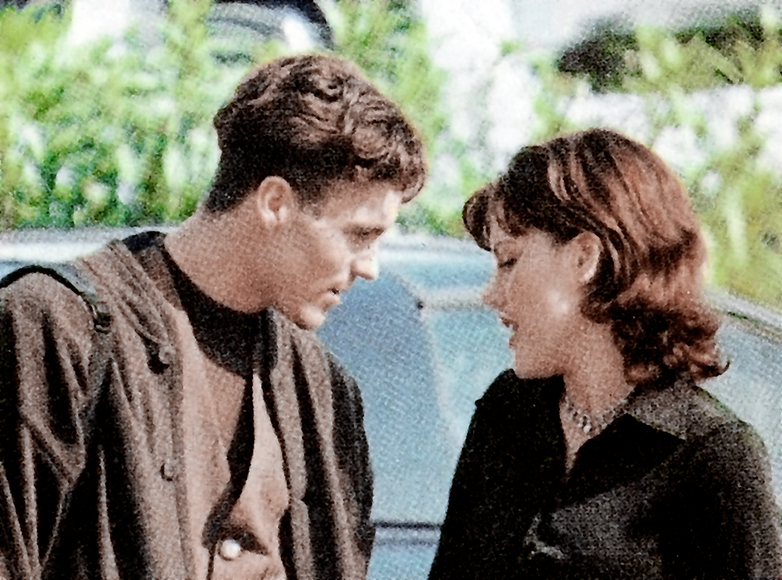 Life After Death
Rave On
Who's Zoomin' Who?
Things That Go Bang In The Night
Intervention
Squash It
Hate Is Just A Four-Letter Word
Rock Of Ages
Christmas Comes This Time Each Year
Unreal World
Squash It