Fraternal twins, Brandon and Brenda Walsh, begin their first day at West Beverly where they meet the different social groups, such as popular students Kelly, Steve and Donna and academically driven Andrea Zuckerman. Freshmans David and Scott try to fit in.

Twins Brandon and Brenda from Minnesota arrive at trendy West Beverly Hills High School. Brandon joins the newspaper staff and meets Andrea Zuckerman, the intelligent and devoted editor. Brenda is befriended by snobbish Kelly, who picks her as a chemistry lab partner to avoid being paired with an overweight girl. Marianne Moore, a rich, popular yet reclusive girl, uses skywriting to invite the entire school (minus freshmen, of course) to a party at her mansion. Freshmen David and Scott crash the party, and a drunken Steve insists that David drive him home. After delivering Steve to his door, the unlicensed David accidentally damages Steve's car, prompting a sober Steve to begin a frantic search for the culprit.

Meanwhile, Brandon connects with the withdrawn but beautiful hostess and asks her out on a date, where she realises they don't have to move fast. The romance quickly fades however, when Brandon accidentally insinuates that they slept together and rumors fly through the halls of West Beverly like wildfire. Marianne is devastated that her "nice" guy is no different than any of the other social climbers that used her to gain status. Andrea is disappointed in him too and gives him the cold shoulder. In a move that shocks the guys and charms the girls, Brandon confesses on the school radio station that nothing happened on his date with Marianne. His sincere and public apology surprises the jaded girl and she decides to forgive him. Their romance however, is not meant to be, and they part as friends. Later, Brandon follows Andrea home to explain himself and discovers that she lives out of district, which he promises to keep quiet about.

Brenda tries to fit in with her new rich friends and they head out to a popular hot spot, where only Brenda is admitted and meets Jason Croft, a gorgeous, twenty-something lawyer. Heady with the excitement of an 'older man', Brenda lies about her age, and becomes romantically involved with him. Her academic performance and her relationship with her family begin to suffer, as her efforts to keep up with Jason take all of her time and energy. Brenda even contemplates losing her virginity to him, but decides to tell Jason the truth about her age first and, when she does, Jason's smooth and charming veneer evaporates, leaving only a smug and condescending jerk. "I should sue your father," Jason sneers as Brenda gasps. And when the waiter comes to refill their wine glasses, he deliberately humiliates Brenda, snidely telling the waiter to check her ID. He finally calms down as he drives Brenda home, but it's too late. The tears are sliding down Brenda's face as she screams at him that she was planning to give him her virginity. The stunned and sorrowful expression on Jason's face do not assuage Brenda's fury, and she slams the door on him, before racing up the walk to her house.

Meanwhile, David spends an entire day at school dodging Steve, who is furious over his ruined Corvette. Steve, whose memory is still hazy, passes out fliers, offering a reward for the culprits 'capture'. When David realizes that Steve does not remember him, he breathes easier... until he realizes that Scott's hat was left in the 'vette. While retrieving the hat, the car alarm sounds. Steve races to the scene, catching the terrified and cowering freshman. He finally recalls the night, and David swears he will have it repaired. Steve drops it, and all is well in Beverly Hills.

Everyone here looks like they stepped out of a music video. I don't even have the right hair
—Brenda

Steve – You got a nose job!
Kelly – Yeah, I did
Steve – Looks good
Kelly – Big improvement, huh!
Steve – Yeah, they took about a foot off
Kelly – Now I know why I broke up with you
Steve – Hey, get off it. I'm the guy who taught you how to work that clutch.
Kelly – I drive an automatic thank you very much.
Steve – Figures

David – Before we go, I have to tell you one thing. I don't have my license. Is that a problem for you?
Steve – YEEHAW!!
David – Guess not

There are better ways to get popular than advertising your sexual conquests!
—Andrea to Brandon

Darren Star – I was 27, and I was approached by Fox. They were interested in doing a show set in high school in Beverly Hills and had already arranged for Aaron Spelling to produce it. So I went and pitched. ... The one show I really liked was “Thirtysomething.” The issues were so small and particular to that group, and I wanted teenagers to examine their own navels, in a sense. It would be their point of view, like the John Hughes movies that were very popular at the time, like “Breakfast Club”.
Charles Rosin – I looked at the pilot, and I fell asleep. It really didn’t seem like something I was interested in doing. But Darren and I, and the staff at that time, talked a lot about making a show that was as true as it could be for the teenage experience, and I signed on[1]

i want your love | TRANSVISION VAMP
brandon wakes up

clear to you | THE INNOCENCE MISSION
Marianne & Brandon's bike ride 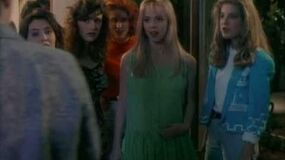 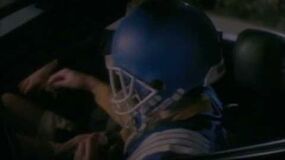 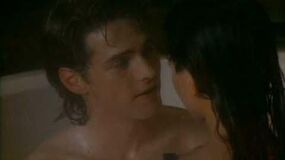