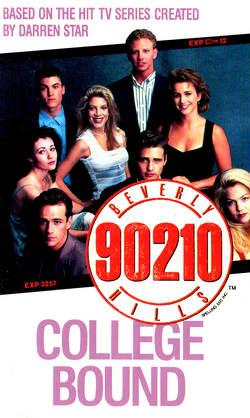 College Bound — twelfth and final novel in Beverly Hills 90210 book series written by Mel Gilden. It was published in august 1994 by HarperPaperbacks.

FINAL COUNTDOWN — The fall semester is right around the corner, so when Steve Sanders gets the use of a Malibu beach house for the last few weeks of the summer, it promises to be the best of parties for the gang of 90210!

For the first time, the Walsh twins and their friends are on their own and with the future wide open ahead of them, life will never be the same.

Includes introduction A Lot To Think About and excerpt from Graduation Day. List of chapters:

Novel is based on season 4 episodes teleplay:

Cover and insert photos by Andrew Semel and Timothy White.