Kevin Inch
Confession is the 6th episode of Season 9 of Beverly Hills, 90210.

Valerie plans her own farewell party; desperate for money, Sophie increases her circle of friends; Kelly's aid to Leah takes her outside the law; Noah turns adrenaline junkie; and Steve takes his newspaper in a new direction.

Lenny receives joint custody of his daughter. After he explodes in a rage during his first visit, Kelly decides to help Leah and her daughter skip town and assume a new identity. Lenny follows them, realizes what they are planning, and attacks Leah. Matt, bothered by a guilty conscience, helps Leah obtain the necessary identification to start her new life. Valerie elects to throw a massive rave as a farewell party before turning herself in to the police. David calls Abby to inform her of Val's plans, and she intercepts her daughter at the police station. She pleads with Val not to confess and offers forgiveness, insisting that she is to blame for not intervening on Valerie's behalf. Unable to communicate with Noah, Donna begins dating Matt.

She hurts Matt's feelings by ignoring him during Val's party to tend to the inebriated Noah. Noah breaks a promise to Donna by skipping a court-mandated AA meeting and continuing to drink. Sophie tries her hand at waitressing after a disastrous photo shoot. A rich, handsome stranger recognizes her from the billboard and asks her to join him in Paris. She tells David that she has won a movie role, but he later discovers the truth. Steve and Janet struggle to keep the paper going in the aftermath of Brandon's departure. Steve decides to turn the Beat into a tabloid. While investigating a "haunted house," Steve and Janet get locked inside a refrigerator and have sex. They deny that the encounter was meaningful.

wishing i was there | NATALIE IMBRUGLIA
After the intro 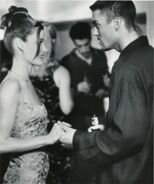