1st – Chuckie's Back to Somewhere In The World It's Christmas
2nd – Addicted To Love to Mr. Walsh Goes to Washington: Part 2
3rd – You Say It's Your Birthday: Part 2 to Here We Go Again
4th – If I Had A Hammer to My Funny Valentine
5th – Straight Shooter to Child of the Night
6th – Love Is Blind to present

1st – David broke up with Donna because she wouldn't sleep with him.
2nd – Donna dumps him after he cheats on her.
3rd – David was getting violent and they just decided that it wasn't working out.
4th – Cliff showed up and "threw his towel in the ring"
5th – David forged one of Donna's check, so she broke up with him because she couldn't trust him anymore

When was it that we fell in love, when we were 18 or 16, maybe 10? I don't know 'cause the truth is I can't picture a time that I wasn't in love with you. I always knew you were the one that could look into my eyes and see my soul. I don't question your commitment to us and I know there's nothing we can't work through. And I accept you as my partner and as my best friend above all others. It's a miracle to find the kind of peace and happiness that you've given me and in honor of that miracle, I pledge before our family and friends to love and to cherish you forever
—David´s wedding vows to Donna[src]

David & Donna is a relationship on Beverly Hills, 90210, portrayed by Brian Austin Green and Tori Spelling.

David and Donna first started dating in high school. Donna was the socially awkward sophomore and David was a geeky freshman. The start of their relationship was David asking Donna to a school dance and Donna accepted.The night of the dance David leaned in to kiss Donna and she backed away. She didn't want to admit that she liked David because he was younger and their friends were teasing her. That night they were dancing and Donna kissed him. They became a couple and stayed together all through high school, even though Donna wanted to stay a virgin until she got married; David agreed to follow Donna's wishes. David graduated high school a year early to be able to graduate and go to college with Donna. David cheated on Donna with AR rep Arial in season 4.

David and Donna ended their relationship, (after some time) they were able to remain good friends. The were in an on and off again relationship. They were together through most of the seventh season. On graduation night Donna surprised David when he walked into the bedroom Donna was in the bed waiting for him. That night they made love for the first time. Donna lost her virginity. David's club was failing in season 8 and he forged one of Donna's checks. Once she found out Donna kicked him out of the beach apartment and they were broken up once again. She then had a serious romance with Noah Hunter, but that eventually ended and in the final season, she got back together with David again. Donna and David wed in the show's series finale. 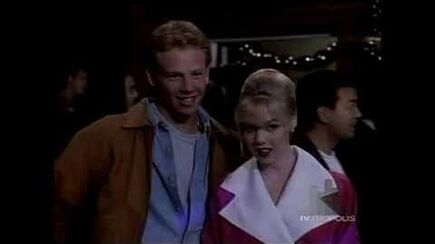 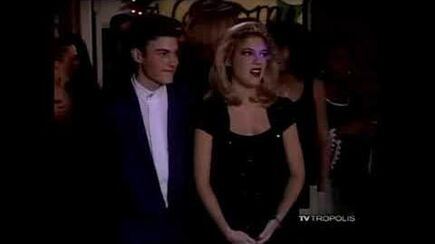