Dylan – I was thinking about getting married
Toni – Really? Anyone special?

Earthquake Weather is the 9th episode of Season 6 of Beverly Hills, 90210.

An earthquake traps Susan and Brandon in an elevator with a pregnant woman; Donna gets a warning from Ray's therapist; friends are rocked by Dylan's announcement about his future.

Kelly – Tell me something, where was Toni when we were hanging out together in your past lives?
Dylan – I don't know, maybe that never happened, maybe it did; what I know is I love her

I wanna hate her so bad. But I can't. She seems really nice. I'm sorry
—Kelly to Dylan

Children are filled with so many hopes and dreams, but their futures are built on our love
—Donna talks about Ray at the Rose Court

shakin' all over | THE WHO 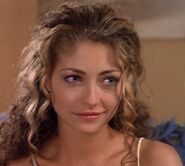