12
Emily Valentine is a recurring character on Beverly Hills, 90210. She is portrayed by Christine Elise.

Emily is a troubled kid, who had moved around to a lot of different schools and was always the 'new kid'. She comes across as relaxed, unassuming and friendly, but is met with a lot of grief from the girls. She eventually feels more and more lonely and is diagnosed with borderline disorder and leaves school to receive treatment. She gets better and eventually takes an interest in Marine Biology, which she goes to France to further study. Emily and Brandon had a very stormy, intense romance and a connection that lasted years.

Emily runs into both Dylan and Brandon on her first day at West Beverly Hills High School. After Emily dates Dylan one night and Brandon the next, Brenda quickly becomes angered by Emily and seeks to ruin her reputation. Under peer pressure, Brenda and Emily reconcile but never have a close friendship.[1] Brandon and Emily become close friends and soon start dating; their first kiss is at the Peach Pit on Halloween.[2] Emily convinces the gang to attend an underground club rave, where she takes U4EA and spikes Brandon's drink with the same drug.[3]

Brandon breaks up with Emily after this incident which leads to her stalking him, sending him cakes and making prank phone calls. After some bitter interactions, Emily douses a West Beverly homecoming float with flammable liquid. Brenda and Dylan arrive to the scene, and after seeing the lighter in Emily's hand, Brenda, realizing how much of her past antagonisim towards her had contributed to things, talks Emily down.[4] It is soon revealed that Emily has been institutionalized, and Brandon visits her at Christmas.[5]

A few years later, Brandon is fed up with his college campus life and leaves for a drive up the coast. While filling up his car he notices a woman who reminds him of Emily and he goes in search of her in the Bay area. After driving to her last known address and finding out that she no longer lives there, he takes a cable car ride in San Francisco and bumps into her and discovers that Emily has made a full recovery.[6] The two of them share Thanksgiving weekend together. The couple declare their love and passion, but eventually Emily reveals that she is moving to France after Thanksgiving.[7] They say goodbye and it is revealed in the fifth season that she never called him when she arrived in Paris.

A year later, Emily calls Brandon to ask him to meet her at the airport, supposedly for a short stop over visit. They eventually share a kiss. The matter is complicated by the fact that Kelly, Brandon's girlfriend at the time, was caught in a house fire. Later, Emily, acknowledging that Brandon is in love with Kelly, finally encourages both Kelly and Brandon to find their way back to each other.

This isn't Beverly Hills, it's Knot's Landing! When I got to school they should have given me a score card instead of a class schedule, so I can keep track of everyone's boyfriends!
—Emily to Brenda[src]

Oh look! If it isn't the president of the West Beverly welcoming commitee
—Emily to Brenda[src] 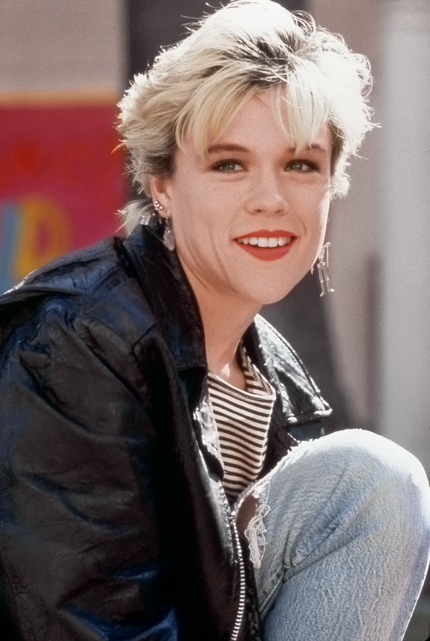 Up In Flames
Injustice For All