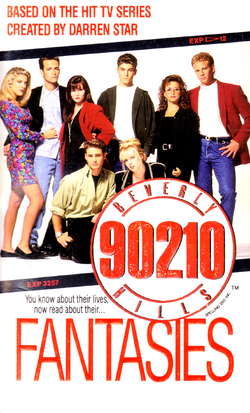 Fantasies — fourth novel in Beverly Hills 90210 book series written by K. T. Smith. It was published in august 1992 by HarperPaperbacks. The only book in a series which is not based on the show's teleplay and introduces original plotlines.

THE SUMMER SUN IS FADING FOR THE KIDS OF 90210 — As vacation draws to an end, the gang of West Beverly High gets together around a campfire for a final farewell to their lazy days at the beach. When Brandon complains about spending his vacation as a cabana boy, a unique game of what if begins...

The Question — what would be the perfect fantasy of life long after the days of high school at WBH are left behind?

The Walsh twins and their hip friends bare all to each other and answers they give are both funny and surprising yet somehow so right. Fantasies tells the hilarious and often touching dreams of the entire gang from the coolest zip code around.

Every character became a successful person in their fantasies:

It's also the only original novel in a US series NOT based on show's teleplay. The other one was published in UK series — The French Rival.