Jason works as a TV director and wants to cross over into film, but suffers from anger management issues and habitually gets into fisticuffs with actors on his sets. He's married, but feels more like a client than a husband to his PR wife, who's constantly working to rectify his public image. Actors Guild President Gabrielle is constantly having to deal with his work messes and he doesn't share a tight connection with the cast, especially Jennie, who seems to loathe him deeply.

Jason is first seen in a flashback to five days prior, directing an actor named Chaz who is presumably playing a superhero. When he asks Chaz to dig a little deeper because he needs him to make the audience feel the regret Chaz's character should feel concerning Cassidy, he is interrupted by Chaz, who says that his character was saving the city and doesn’t give a crap about Cassidy. He goes on to say that he doesn’t need acting advice from Jason, and calls him a "pin up boy for horny teenage girls, who he needs to get over himself because all he’ll ever be is Brandon Walsh". Jason laughs and then punches him in the face. In the present day, the punch he threw has hurt his hand and he wears a cast. When he arrives at the reunion and the gang all see each other together for the first time in twenty years, he is the first to speak up, saying how it's “weird” and when no one else says anything, he continues by saying he knows everyone was thinking it. Later, when Gabi says how she's so happy that the gang is all together, Jason tells her, how he wished that were true, which makes the atmosphere a bit somber as they remember their friend Luke Perry. Later at the reunion panel, when someone asks who among the cast was least like their 90210 character, Jennie says it was Jason because while Brandon Walsh was squeaky clean, she says that Jason might have lost his temper on set a few times. Since he's at the reunion panel as damage control for his altercation with Chaz earlier, he tried to amend her statement. He asserts that violence is never the answer, but that he always tries to stand up for the little guy.

When the gang is all hanging out after the reunion asked about kids, he tells the gang that he and Camille tried years ago, but work got crazy. So they stopped trying and decided not to have kids. Eventually, he is just sitting in bar nursing his drink and some girls giggle and point at him. Jason ignores them, and sees Jennie walking in. While the two share a genuiene moment without any verbal sparring, he tells Jennie that he knows who she really is; a smart, fierce woman he went to work everyday with for 10 years. She jokes that it was more like it eight since he was only main for the first eight seasons[1], four episodes of Season 9[2], and a cameo in the series finale.[3]. After Jason and Jennie hook up, he asks her what exactly is it about him that bugs her so much when she utters a “kill me now”. When he says that there plenty of people who think he’s not so bad, she says that she always felt like he thought that he could charm his way out of anything. He fires back at Jennie about how there have been consequences for him too and points out how he can’t get his indie film financed and is stuck directing teen dramas on TV. Back in Los Angeles, he is just about to confess to Camille that he cheated. But she stops him, saying how she knows they have barely spend any time in the same city let alone together in the last few month. But says that will soon change since she's pregnant.[4]

Sometime later Tori manages to get him on board with the reboot by saying she will talk to Fox to get him to direct the pilot. Meanwhile at Gab's house he gets a notification saying that because of the guy he punched, he can’t even direct himself on the reboot. Gabrielle is surprised he's on board. Eventually, he lets it slip that he hooked up with Jennie in Vegas. While he paying off what Tori owed at the restaurant he frequents so that they're even, he gets a call from his doctor. Who reveals to him that the kick he received by Chaz did not leave any permanent damage. But that he discovered a pre-existing fertility issue. The doctor tells him that while conceiving children is possible, he will require significant medical intervention to do so. He is last seen holding a Brandon doll with pins stuck to him like a voodoo doll.[5] He is then seen working in the Peach Pit with a film noir inspired black/white aesthetic in the scene. Jason is dressed up in the peach pit uniform and happen to be cleaning up,when Jennie walks in well after the restaurant has closed. The two hook up in Jason's dream. It quickly turns into a nightmare when Jason looks down and sees that Jennie's stomach now has visible baby bump. Color is restored when the director (who is also Jason) yells “Cut!" and tell the Jason dressed in the Peach Pit uniform to not worry because the baby’s not his. He wakes up to an empty bed, and as he goes to the kitchen, Camille is just getting in. He confronts her about the baby by telling her that the kick to the nuts he received from Chaz revealed that he can’t have kids. He then proceeds to tell her that he will be staying at Gabby’s until further notice. However, he eventually takes Jennie’s advice and goes to the home he shares with Camille and he too comes clean about his own infidelity.[6]

At the first table read for the pilot, he feels like there’s too many claustrophobic interiors talked about in Anna Blakemore's first version of the script and it makes him feel like he can’t shoot the episode as cinematic as he wanted. Later, he gives some helpful insight to Jennie, by telling her to put herself in Kyler's shoes. That Kyler is now the same age Jennie was she was first on Beverly Hills, 90210, and that deep down she is trying to measure up to her mom. Later, when Gabrielle confesses to Jason that she kissed Christine Elise, he's quite supportive. Even joking with her about how he can't believe they both have kissed the same woman.[7] A news report is heard playing and talking about about how there's some high drama on the set of 90210. The news reporter goes onto say that it’s also being reported how a massive fire destroyed most of the sets, which has director Jason Priestley working day and night trying to figure out how to get the show back on the road. Moreover, that some sources claim that production is millions of dollars over budget, but has failed to shoot a single scene. When Christine Elise clears the room, she tells the rest of the gang that no one wants to insure the show when there's an active threat out there. Tori says they don’t need insurance, but she says they do since the diner is one of the only sets that didn’t burn down in the fire. Gabrielle asks her who the company is and suggests calling them. She calls them delusional and tells them that they are being forced to shut down. She says that she just came from telling Jason and he took it very well. In reality, this far from the truth, as he is seen ripping stuff around his office. When Jennie confronts him for how he's letting his personal life affect his work life, he confesses to Jennie that he’s thinking about leaving Camille because he doesn’t think he can raise another man’s baby. After they wrapped the David and Donna sex scene, Camille calls Jason multiple times. Jennie finally answers his phone, and tells Jason he really needs to take this call. She reveals that Camille is in an ambulance and he rushes out of work to go to her.[8]

Initially he is in the Caribbean with Camille who has been ordered to be on bed rest, and decides to skip the upfronts to be there for her and the baby. Camille though, comes to the realization that as much as they have tried to work things out, it’s not looking like they can. While Jason has worked very hard, he’s not gonna get over the fact that her baby isn’t his. She tells Jason that she still wants to be his friend and publicist, and jokes that now as a single mom, she will have to start charging him to pay her bills. At the aforementioned upfronts Brian tells Jason about the situation with Zach. Jason takes a look at the picture, and recognizes the woman. He walks away, but look at Zach carefully and it is implied that he might be the dad. At last Christine reveals that the 90210 reboot was picked up. However, because the network has no money, they will shoot in Canada, where the pilot will be re-shot, Anna is being replaced, they are also bringing in an entirely different guest cast. But unfortunately, this also means that the network can’t afford to bring back all of 7 of them. [9] 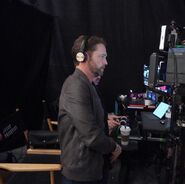