3
Kyler is a recurring character on BH90210, portrayed by Karis Cameron.

Kyler is a 17-year-old high school student, who dreams of becoming an actor, despite her mother's trepidation. Later, Jason describes her as being just like Jennie was back in her youth since she’s now the same age Jennie was back when they were shooting the original series’ first season. Jason describes her as strong willed, hot-headed and looking to rebel. But that deep down, she just wants to make her mom proud and be just like her, even if she won't admit it. [1]

She is first seen lounging by the home pool while her mother, Jennie, launches her father's stuff over the balcony ledge. She asks her mom why she can’t just throw his stuff in the garbage, to which Jennie replies that it just wouldn’t be nearly as satisfying. [2]

Later, she and her mom argue about her desire to become an actor. Kyler admits to skipping school for an acting audition that landed her a minor role as a drunk cheerleader. Jennie doesn’t want her to go into the entertainment business and takes away her audition script. Pissed off, Kyler diverts Jennie's focus to an envelope containing divorce paperwork. She snatches her audition script back from her mom's hands. Determined to pursue acting, Kyler threatens emancipation from her mom. Jennie eventually tells Kyler that she booked her a recurring role on the reboot for 90210. Kyler agrees to a compromise that offers her acting experience while under her mom's supervision to ensure that she doesn’t repeat the same mistakes that Jennie did as a teen actress. [3]

She is sent to spend some time with her dad after Jennie found herself scared for their safety when she received the blood-covered Kelly Taylor doll. [4]

Kyler is next seen having breakfast with her mom and Wyatt Jackson in their kitchen. She is annoyed that in the press release her name isn’t mentioned. Instead, she’s just referred to as Jennie Garth’s daughter. She then tells her mom that she has received like 20 DMs telling her that Jennie is the only reason she got the role. To which Jennie replies that its why social media is dangerous. However, Kyler tells her mom that to Jennie everything is dangerous.

Despite Jennie giving her a role on the show, it's revealed that Kyler still has to audition. Even if its a formality. At the audition, another girl named Tilda turns out to do a better audition than Kyler. After both girls have left Tori tells Jennie that maybe Kyler is a Donna. Eventually breaks it to Kyler that rather than playing her TV daughter, she will instead be playing Donna's daughter in the reboot. At which Kyler is relieved because she thinkt it will much easier to work with Aunt Tori, than her own mom. At the table read for the first episode of the reboot of Beverly Hills, 90210, she gets frustrated and walks out when she realizes her part is more like glorified extra; having only one line buried in act three of the script. Kyler is still visibly upset when she goes to the party hosted by Jason. [5]

On the first day of shooting after the fire, Jennie tells Gabrielle, Shannen and Tori that she needs to have some words with Jason over wardrobe choices for Kyler. Due to her age, she is not comfortable with Kyle being dressed in a bikini saying her one line. [6] 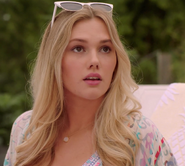 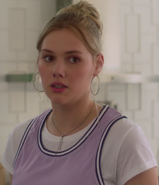