Leading From The Heart

Leading From The Heart

Daniel Attias
Leading From The Heart is the 11th episode of Season 2 of Beverly Hills, 90210.

A mutual attraction between Kelly and the Walshes' visiting cousin Bobby is complicated more by others' assumptions than by Bobby's wheelchair. Meanwhile, Brenda takes another driving test.

Brandon and Brenda's cousin Bobby visits, as he is considering transferring to UCLA. He is paraplegic, the result of a skiing accident three years earlier. Bobby and Kelly develop a mutual interest, but Brenda fears that Kelly will break her cousin's heart. Although Bobby is extremely well-adjusted, he feels uncomfortable when he attends a party with the gang. After seeing Kelly dance with another guy, Bobby becomes depressed and asks to leave. He squelches his relationship with Kelly because he believes that she would lose interest in him. Brandon confesses his guilt about the accident to Bobby, who insists that Brandon should not blame himself for daring him to take the fateful ski jump. Brenda finally passes her driver's test, but is afraid to get behind the wheel. Emily joins the school paper. David asks Donna for a date.

Steve – Well is it a TV show, movie or book?
Brenda – Steve, you better pray it's not a book

he's got it goin' on | ICY BLU
kelly dances with tal

crazy | SEAL
Bobby gets upset with Kelly at the party 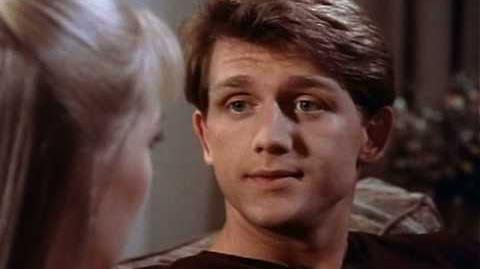