Once Upon A Time In Hollywood
Riverdale
Oz

Perry landed the role of Ned Bates on daytime drama Loving before being cast in 1990 as guest star Dylan McKay FOX teen drama Beverly Hills, 90210. Audience response to Perry was so overwhelming that, by the time 90210 swung into its second season, he was not only one of the series' leading characters, but a full-fledged teen idol. Perry left 90210 in 1995 to pursue theatrical films and returned for the last two seasons of the series. From 2017-2019, Perry starred on CW teen drama Riverdale, as the father of Archie, Fred Andrews. Perry's final role will be in the 2019 Tarantino film, Once Upon A Time In Hollywood, premiering August 2019.[2]

Mr. Perry sadly passed away on Monday, March 4, 2019, after suffering a stroke the Wednesday before.[3]

...She’s a very big part of the success of this show. She taught me a lot. I’m glad she was my scene partner
—Perry about Doherty, at 2016 RewindCon

I think he was the most three-dimensional of all the characters. That’s not saying I did anything in particular, it was done on the page
—Perry on Dylan McKay[4] 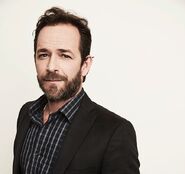 Behind the scenes luke perry