Owner and Manager of Peach Pit
US Navy

231
Nat Bussichio is a principal character on Beverly Hills, 90210. He is portrayed by Joe E. Tata.

Nat is the friendly owner of Peach Pit, a popular diner in Beverly Hills. He's spent most of his life at the Pit, a huge part of his childhood, as it was set up by his late father, Salvatorio Bussichio. Nat is a kind-hearted soul, who cares about people and the neighbourhood. The Pit sets up free Thanksgiving and Christmas meals for homeless residents of Beverly Hills, and Nat is always there to give something back to the community.

Nat suffered a heart attack during the fourth season, leading to the possibility of the Peach Pit's closing. Brandon sacrificed much of his time to oversee the diner's functioning while Nat recuperated. The Peach Pit was saved when Dylan McKay bought out Nat's cousin's share. Nat and Dylan's partnership was further explored in season five; particularly during Dylan's massive relapse. During this period, Peach Pit After Dark made its debut as an after hours night club owned by Nat and Dylan and run by various members of the gang. Dylan stole money from Nat during this point. During Dylan's intervention, Nat pointed out how hurt he was that Dylan stole from him.

During the sixth season, Nat rekindled his romance with his former girlfriend, Joan Diamond, whom he hadn't seen in over two decades. Joan became pregnant, and she and Nat got engaged. She went into labor in the middle of the wedding ceremony and, at the hospital, insisted on completing the marriage vows before going into the delivery room. She gave birth to Nat's only child, a son named Frankie. Nat also escorted Donna Martin down the aisle at her wedding to David Silver in the series finale. Donna's father, Dr. John Martin, died of a stroke midway through the final season of the series.

Frankie is the son of Nat Bussichio and Joan Diamond. Frankie was born in dramatic fashion on the day of his parents' wedding, September 4 1996. Joan's water broke in the middle of the wedding ceremony and the couple, their celebrant and the gang rushed to the hospital. Not wanting their child to be born before they were married, Joan insisted the ceremony go on. Miraculously, the contractions stopped and Joan was pain free as they exchanged vows and the celebrant pronounced the two as husband and wife. 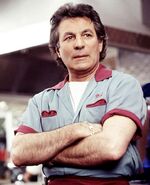 Nat Bussichio at the 90210 Reboot Wiki