9
Nikki Witt is a recurring character in Season 3 of Beverly Hills, 90210. She is portrayed by Dana Barron.

Nikki is a chill, enthusiastic dance fan from San Francisco, who spends the summer before her sophomore year in Beverly Hills. She is very outgoing and direct in her approach to people and easily makes friends among the gang. She decides to return to live with her parents in San Francisco after a semester at West Beverly.

In the summer of 1992, Nikki stays with her aunt and uncle in Beverly Hills and spends some time hanging out at the Beach Club where she meets David Silver and Steve. Nikki likes David's music and they start hanging out and kiss. David doesn't tell Nikki he has a girlfriend until after and she's cool, not having any deep feelings for David. After summer ends Nikki transfers to West Beverly for her sophomore year and gets assigned a "senior buddy", Donna. Once Nikki finds out that Donna is David's girlfriend, Nikki comes clean to Donna about the summer and they decide to make a fool out of David at a party Dylan hosts. Nikki and Donna become friends and David and Donna move on, staying together.

Nikki decides to work for The Blaze and finds herself interested in Brandon Walsh, who has exaggerated reactions to her interest in him while Nikki's all 'eh, what?' cause she's so chill. After a few random run-ins with each other, Brandon, who's being really weird, suddenly kisses Nikki, who reciprocates. They start dating and find that they work well together, with Nikki being cool, artistic and carefree and Brandon being strait-laced and serious meshing well. Nikki tries to teach Brandon to relax and Brandon finds himself falling for her great character.

Nikki is initially drawn to David’s music while at the Beverly Hills Beach Club during the summer. Their shared interest and fondness for each other soon led to moments of making out, with Nikki left unaware that David had a girlfriend away in Paris. David eventually restrained himself and revealed the truth about Donna, which led he and Nikki to part ways. When school began that fall, however, David soon learned that Nikki had not only come to live with her aunt in Beverly Hills, but had enrolled at West Beverly High. Being a sophomore, she was paired with a senior buddy on her first day of school. This buddy ended up being Donna, and both were initially unaware of the other’s connection to David.

Nikki eventually learned who Donna was, and the summer fling was accidentally revealed between them. However, Nikki convinced Donna that David was indeed committed to their relationship, repeating his eventual revelation that he had a girlfriend, along with his words of loyalty. The pair soon lured David into a humorous position in which Nikki pretended to come on to him—just as Donna walked in to hear him resisting. As David became panicked and confused, the girls laughed and informed him that the truth was out. Nikki then gave the couple their privacy as they acknowledged their commitment.

At West Beverly Nikki literally bumps into Brandon a couple of times and becomes interested in him. After being formally introduced at a later point, the two seemed to have developed an interest in one another. However, Brandon became conflicted upon discovering that Nikki was actually a sophomore—despite encouragement and teasing from Brenda and the others. Nikki, aware that their attraction was mutual, chose to pursue her interest in Brandon, seemingly always a step ahead as she appeared in several of the places he frequented, or spoke to several of his friends.

Brandon, however, remained comically torn between his attraction to Nikki and his reservations about dating someone younger. Just as Nikki seemed to be on the verge of letting go, Brandon surprises her by finally admitting his feelings and the start going out.[1] Nikki and Brandon have an easy going, happy relationship for the most part. Nikki lets Brandon know that she would like to go out with him and wishes that he will choose a local college — which he eventually does.[2] Nikki also helps pacify a heated situation at the pig skin dance, leading what would become a united dance between members of rival schools.[3]

Their main spat occurs over the fact that Brandon doesn't dance, but is resolved quickly when Brandon discovers its romantic impulses.[4] When Nikki's abusive ex-boyfriend briefly arrives in town, Brandon defends her and effectively drives him off for good. Brandon and Nikki dated for months before she eventually moved back home to San Francisco due to missing her family. Amidst the matters they faced, the two grew progressively closer and discovered that age was indeed irrelevant to their compatibility.

A Song Of Myself 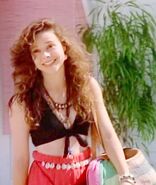 Sex, Lies and Volleyball/Photo Fini
A Song of Myself
The Back Story
Highwire
Home and Away
A Presumption of Innocence
Destiny Rides Again
Wild Horses
It's A Totally Happening Life