Bartender at Peach Pit After Dark

84
Noah Hunter is a principal character on Beverly Hills, 90210. He is portrayed by Vincent Young.

Noah is a member of the famous Hunter clan, a wealthy family via the oil business through their company Hunter Oil & Chemical. He often withholds details of his identity from new friends due to a degree of sensitivity regarding it. He was sometimes given the cold shoulder by his half brother Josh Hunter while growing up, who declared that he wasn't a real Hunter because they had different mothers. This would leave the men with a caring but somewhat distant relationship throughout their adult lives. Noah is normally shown to exhibit goodwill. He assists David Silver during a troubled time and encourages an amnesia-stricken Kelly Taylor to work things out with her boyfriend Brandon — despite the fact that she is momentarily interested in Noah.

It is eventually revealed that Noah had been involved in a car accident that killed his girlfriend Beth in November of 1996. This initially causes him to reject the romantic affections of Valerie, as he was still in the process of healing. In time, however, the two embark on an ultimately unsuccessful relationship. Noah later begins seeing Donna after she breaks up with David. Though the two get serious about one another, they are eventually both unfaithful at various points. During his first infidelity, Noah is intoxicated, while Valerie, the woman he cheats with, has unwittingly been drugged. After discovering that his brother Josh had been the one to drug Valerie, Noah brings the truth forth.

After Noah and Donna break up following the revelation that Noah was drunk on the night Beth died and that his family had paid to cover it up, Noah begins living a wild lifestyle, eventually getting caught up in a group of narcotic traffickers led by Josie and Shane Oliver. Noah is kidnapped by Josie and Shane, who demand a ransom for his release, but he is rescued following efforts from Steve Sanders and, more directly, Dylan McKay, which results in the three sharing a moment of camaraderie. After a tumultuous relationship with his father, Daniel Hunter, Noah enters his father's office one night to find that he has committed suicide. Noah concludes the series on good terms with both Donna and David, happily attending their wedding along with the rest of his friends and his new love, Ellen. 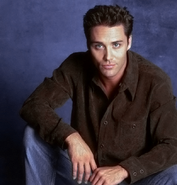