One Man and a Baby

Burt Brinckerhoff
One Man and a Baby is the 12th episode of Season 1 of Beverly Hills, 90210.

Brandon gets a taste of parenthood from his date - and her child. Brenda jumps at her radio contest prize - skydiving.

Brandon meets senior Melissa Coolidge on the school lawn during lunch. He makes a date with her and learns that she is the mother of an infant son, Joey. Brandon is forced into emergency babysitting duty while Melissa has an interview with Harvard. Jim and Cindy are unavailable, but Steve helps Brandon through the eventful afternoon. Melissa's interview does not go well, and she becomes frustrated with her life. She fears that she may have to give up her son, but motherly Cindy calms her with a heart-to-heart talk. Brenda and Kelly win skydiving lessons from a radio contest. Initially afraid, they decide to go through with it when they meet the handsome instructor. They compete for his attention and during their in-flight argument, they both fall from the plane at once, laughing and screaming through the entire jump.

〉Kelly – Following me again?
Steve – In your sweetest, x-rated dreams〈 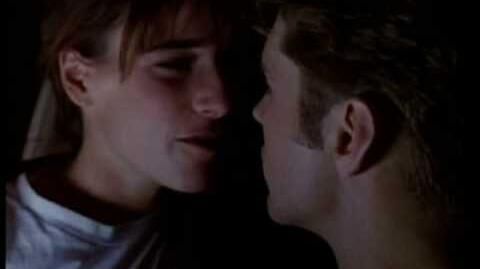 Retrieved from "https://90210.fandom.com/wiki/One_Man_and_a_Baby?oldid=89318"
Community content is available under CC-BY-SA unless otherwise noted.