Tom Rose gets suspicious about Dylan's motives. Brandon continues being drawn closer to Valerie and lashes out at Kelly, who's concerned about him. Steve finally meets his mystery woman, but things take an unexpected turn. Ray injures Donna in a fight, but still manages to get on the good side of her mother.

〉You know what? I don't like you using me as a stud animal for your networking, okay?〈
—Steve to his father

〉I promised my parents that I wouldn't do anything stupid after they left, and everything I've done from that point forward has been a monument to idiocy〈
—Brandon to Valerie

〉You can still love someone without being married. Why does everything have to be over?〈
—Kelly tries to reunite with Brandon

〉Look, just because I don't say anything, doesn't mean I don't know. You're not my friend; you're not anyone's friend〈
—Donna tells Valerie she knows about her and Ray

〉Dylan – Yeah subconscious – it's a b****
Brandon – So is Valerie〈
―Stones, glasshouse, Brandon

〉Y'know, I'm very impressed you were able to resist her I never could, I always... always caved〈
—Dylan to Brandon

〉Brandon – For once in my life, I'm in no hurry
Dylan – Neither am I〈 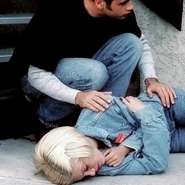 Add a photo to this gallery
Retrieved from "https://90210.fandom.com/wiki/P.S._I_Love_You:_Part_2?oldid=86188"
Community content is available under CC-BY-SA unless otherwise noted.