Your relationship with Dylan isn't over. This is just one moment in a very long lifetime
—Iris to Brenda

Parental Guidance Recommended is the 20th episode of Season 3 of Beverly Hills, 90210.

Dylan's mother arrives with good thoughts for Brenda, but nary a one for Dylan's father; a record company wants to hook up with David, but only if he'll cut manager Steve loose.

Brenda has a fantasy as she is packing up photographs of her romance with Dylan. "If they had approached this whole breakup in a more mature manner, maybe they'd still be together," she ponders. Suddenly her anger flares up and she imagines that she goes after Dylan and Kelly with an ax. At Dylan's house, he and Kelly are making out on the couch. Kelly reminds him he has to straighten up the place before he goes to pick up his mother, Iris, at the airport. While still on the couch, a knock is heard at the door. Iris has taken an earlier plane. She meets Kelly and is surprised to see her, instead of Brenda at Dylan's house. At the Peach Pit, David is being firm in his decision to fire Steve as his manager. He doesn't feel Steve is a good manager. Donna speaks up and reminds David she's been helping him out as the school disc jockey, so he can double up on his schoolwork. How can he have time to do a new record and all the extra class work? Without the extra courses, he won't graduate with the rest of the group. Andrea drops by, in a worried mood. She's been invited to a tea for the Fall of 1993, "Freshman at Yale." She feels she can't compete on a social level with the other students. Kelly joins the group and tells Donna she needs to talk. She tells her about meeting Dylan's mother. She feels Iris doesn't like her and prefers Dylan date Brenda. Kelly tells Brandon that Brenda still won't speak to her.

At home, Brenda is still in a very blue mood. Brandon tells her that the gang asked about her. He adds that Iris is in town to meet with Jim Walsh. Brenda confesses to Brandon that she never imagined that Dylan would not choose her, over Kelly. Brandon tells his parents that he plans to buy a CD player for his car. Brenda tells her father she knows that Dylan and his mother are meeting with him but she had rather not hear any of the details. Iris tells Jim Walsh that her ex-husband is a shrewd man, a con-artist. She wishes Dylan could realize that about his father. Dylan tells his father he wants to believe he is a changed man, and that he really has his son's best interest at heart. Jack asks Dylan to spend time with Iris and find out what she plans to do about the trust fund. Dylan drops by to see Kelly and apologizes for his mother's rudeness. Kelly reminds Dylan it is past midnight and it's Valentine's Day. They kiss. Steve takes David to see the Icon Records chief, Curtis Bray. Donna goes along too. Mr. Bray is busy and they have to wait. Dylan invites Iris to take a ride to Ojai for the day. She's impressed that he is more considerate than he used to be. Dylan says he wishes she could sit down with his father and try to sort things out. She agrees to join Dylan and Jack for dinner.

At the Yale "New Students" tea, Andrea is lonely and bored until she meets an old friend named, Jordan Bonner. While shopping for his new CD player, Brandon finds his choice of equipment is too expensive. Suddenly, when he sees a sports commercial on a television set, he uses the phone to call in a bet with his bookies. Brenda daydreams that Kelly comes to see her, intent on apologizing. As they discuss being friends again, Brenda decides vengeance is more to her liking. She takes a pair of scissors to Kelly's hair. At the Yale student tea party, Andrea confesses to Jordan that she'll have to get a job, even with the scholarship. David and Steve finally get into see Curtis Bray, the record chief. He overwhelms them both. He sends Steve out of the office to get some free CDs of recording stars. Then he tells David to fire Steve as his manager or they won't have a recording deal. Jack, Iris and Dylan are having drinks before going out to dinner. Iris is very suspicious of Jack's motives about Dylan's trust fund. She says he bought her off once, kept her away from her son, but now she's in control. Iris storms out in disgust with Jack.

Brenda is dressed and ready for school but feeling very down emotionally. She tells her father she's trying to be mature about Dylan's rejection of her. Iris talks to Dylan about his faith in his father. She is shaken by the fact that Dylan seems to love and respect him. Dylan says he's had a lot of rejection in his life and now that his father needs him he is not going to turn his back. David tries to tell Steve that the record company will sign him only if he fires Steve as his manager. Steve does not listen. David tells Donna and Kelly of his dilemma, regarding Steve. The girls feel he may need a manager to protect him and he should investigate Curtis Bray thoroughly, before signing a contract. Brandon talks to Andrea about her "Yalie" tea party. She is still feeling intimidated by all the "blue bloods" who were there. A valentine comes by fax to Andrea, from her friend Jordan Bonner. Dylan tells Kelly he struck out with Iris, regarding changing his trust fund. He guesses he'll have to wait until he is twenty-one. Kelly sees Brenda and tries to talk to her, but her friend "freezes her out."

Iris drops by the Walsh house to deliver her gift to Brenda. She goes upstairs and Brenda is pleased with the crystal pendant, which is said to give inner strength to the wearer. David meets with Steve at the Peach Pit to tell him about Curtis Bray's ultimatum to fire Steve, or there's no recording deal. Steve is hurt and angry. Iris tells Dylan that on the way to the airport she'll stop by Jim Walsh's office and sign the trust fund papers, since that's what he wants. Kelly and Brenda meet in the school hallway. Brenda speaks briefly and both are relieved to end their feud. Instead of throwing out all her mementos of her romance with Dylan, Brenda stores it in the garage. In addition to his new car stereo, Brandon surprises his mother and Brenda with gifts of perfume. Jim Walsh, still suspicious of Jack McKay, vows to go slow in dissolving Dylan's trust fund.

Kelly – Brenda, please don't shut me out like this
Brenda – Kelly, you have Dylan now what more do you want?

With everything we've been through with Dylan, kinda feel like he's a son to me
—Jim to Cindy

losing my religion | R.E.M.
1/brenda looks at photos and has a daydream • 2/brenda in her room, brandon comes in • 3/brenda has another daydream, takes the CD out and puts it in the dylan box

action speaks louder than words | TARA KEMP
steve and david talk in the hall; kelly, donna and david in the booth 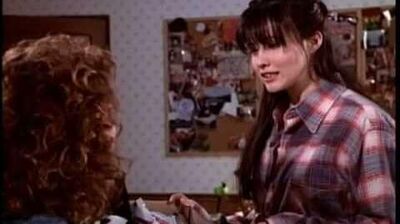