Perfectly Perfect is the 24th episode of Season 3 of Beverly Hills, 90210.

At Kelly's surprise 18th-birthday party, the guests get an even bigger surprise from Kelly. Meanwhile, Steve badgers Brandon into joining him on a dating-game show.

❝ I hate surprise parties, it's like having a job interview on your birthday ❞
—Dylan to Andrea and Donna

❝ The Andrea Zuckerman zeal of approval – what more could you ask for? ❞
—Steve to Brandon

land of 1000 dances | WILSON PICKETT
kelly arrives at the party 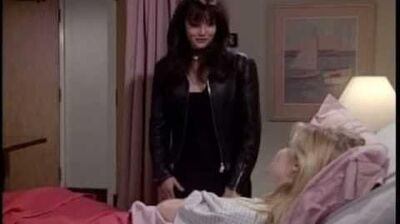 Retrieved from "https://90210.fandom.com/wiki/Perfectly_Perfect?oldid=85287"
Community content is available under CC-BY-SA unless otherwise noted.