When the first day of filming is halted amidst the latest threat, the cast makes a list of their potential enemies and sets their eyes on a former co-star who may be holding a vendetta against them. Jason's insensitivity while directing, causes the ladies to become frustrated and Tori stresses over an upcoming sex scene with Brian. Meanwhile, both Gabby and Brian share some personal news with the cast.

baby it's you (cover) | PMC ALL-STARS

high steppin', hip dressin' fella (you got it together) | LOVE UNLIMITED

when we were young | LOST KINGS • NORMA JEAN MARTINE

somebody that i used to know | GOTYE • KIMBRA

eyes on you | SARA BAREILLES

stressed out | TWENTY ONE PILOTS

give me your love | SIGALA • JOHN NEWMAN • NILE RODGERS

high hopes | PANIC! AT THE DISCO

back in the saddle again | GENE AUTRY
shannen finds the rooster 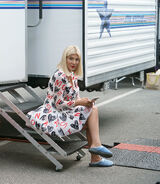