40
Ray Pruit is a principal character on Beverly Hills, 90210. He is portrayed by Jamie Walters.

Ray is a reserved carpenter, pumpkin enthusiast, and aspiring musician living in Reseda. He meets Donna Martin while doing construction work at California University campus. Though Ray has his polite and friendly side, he can grow easily agitated and moody. Ray is insecure about being poor or stupid, and doesn't care for Donna's rich college friends and the circles in which she runs, often criticizing them as being elitist.

When Ray meets Donna, she asks him to participate in her video project for college. Ray is busy, but tells her to come by later, when he's done working. When Donna returns, Ray realises it's some degrading project, tells Donna off and leaves. She finds him, apoogises and asks Ray to come to a party at the Peach Pit, which he does.[2] They really like each other and start dating when Donna helps out at Ray's family pumpkin stand in Reseda.[3] When he and Donna talk about making plans, he forgets to call and Donna goes on a date with Griffin. Ray stops by the Beach House when she's not there and feels rejected, leaving in a huff.[4]

Ray delivers pumpkins to the KEG Halloween festivities, bringing along his 8-year-old cousin, Tommy. Griffin invites Tommy to a KEG children's party taking place the following day. Ray talks with Donna, and tells her he's uncomfortable around this campus setting, because he thinks her collegiate friends are snobs. At the kids party the next day, Ray plays guitar and sings a Halloween song for the kids. He sees Griffin kiss Donna, and quickly packs up his guitar and heads out to his truck to leave. Donna chases after him, saying she had told Ray that she already had a "sort-of-boyfriend." But Ray doesn't want to hear it, and drives off with his young cousin Tommy. Donna ends things with Griffin after he insults Ray and calls Donna tease after she tells him the truth about waiting til marriage. Donna and Ray park near a grove of trees, and Ray serenades her with his guitar Donna confesses that she intends to remain a virgin until she gets married, and would understand if Ray wants to stop seeing her. But Ray says all he wants to do is just be with Donna.[5]

Ray has a strained relationship with his mother, with whom he lives. She's unhappy, alcoholic and continuously reminding Ray that they're not rich, emphasising it as though it defines them. Around Christmas, Ray gets in a really terrible mood, barking at Donna constantly. When she confronts him about it, he tells her it's because of his mother. Ray's father left their family on Christmas Day 1974, when Ray was just 5 years old. His mother was pregnant at the time, and Ray's parents got into a fight, where his father pushed his pregnant mother down some stairs, leading her to lose her baby. Every Christmas, Ray's mother starts drinking heavily and becomes depressed, taking it out on Ray.[6]

Ray eventually became unfaithful to Donna with Valerie Malone because Donna was waiting for marriage to have sex. Ray went on the road to play music and eventually ended up in Portland, Oregon. When David Silver came to Portland with Donna to surprise his mother, Sheila Silver, Ray started showing signs of a bad temper and after a fight with Donna over David's presence, shoved Donna against a wall. It was only the first of a few incidents, one of which involved Ray pushing a very, busy Donna down some stairs, which was witnessed by Valerie Malone. Ray often became remorseful after these incidents, but in time, Donna realized that the abusive, unfaithful relationship had to end, and broke up with him.

Ray soon learned that Donna started dating California University's football quarterback, Joe Bradley during the Halloween party at the Peach Pit After Dark and started stalking her. Ray followed Donna at her apartment, trying to tell her that Joe was not right for her, and harassed Donna again. Joe and Ray attacked each other, causing Ray to have his arm injured. Ray sued Joe for assault, only to have the charges dropped soon after. Ray immediately left town after the hearing. Ray briefly reappeared later in the series, apparently reformed, while also revealing that he'd become engaged to Wendy Stevens and was doing well as a musician.

While in Las Vegas, Ray is surprised by David, Valerie, Steve, and Clare Arnold, who stop in to see his band perform. Ray is concerned for David, who is acting manic and eventually gets robbed by a con-woman. Ray calls Donna, who comes out to comfort David.[7] 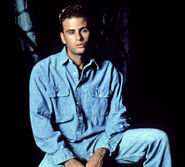 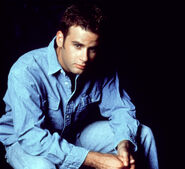 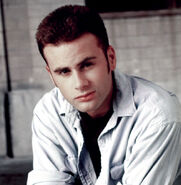 Jamie Walters - The Comfort of Strangers (acoustic)
5x13 "Up In Flames"