But I thought I had one true friend. And when I needed him most he made me second-guess myself
—Andrea to Brandon

Image seems to be everything at the gang's five-year high-school reunion, where Valerie creates new personas for herself and David, while Andrea Zuckerman tries to hang on to her old one; Steve gets comeuppance for a past blunder, then makes new ones with date Janet; and Valerie makes a former football hero fumble.

West Beverly High School is having their 5-year reunion, and unlike every other high school reunion in history, it causes a lot of turmoil and a lot of lies amongst the group's former students and new members.

Once at the reunion, most of the group's fortunes take turns for the better. Brandon delivers a speech in Andrea's case about it being OK that the alumni have made mistakes and aren't on top of the world, with a handsome student asking Andrea to dance and talking about his own divorce. David gets cheers and applause when he plays a jingle for a condom company. Valerie humiliates the jerk who ruined Kelly's high school life, and they both destroy a tile with anti-Kelly graffiti on it. Noah shows to romance Donna, who in turn shows up her obnoxious co-committee member. Only Steve has a less than positive night: he ends up being caught naked in front of everyone via his former classmate's prank, and while he handles that with amusement, he's left sad because Janet tells him he ruined the night and she doesn't want to go out with him again. 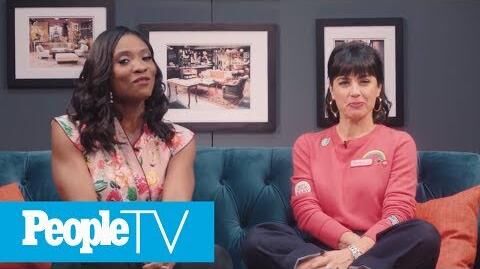 Constance Zimmer Freaks Out While Reminiscing Over ‘90210’ Cameo PeopleTV Entertainment
Community content is available under CC-BY-SA unless otherwise noted.
Advertisement