Steve – What's this, no heart costumes?
Brandon – I wear my heart on my sleeve, Sanders
Dylan – No heart
―Oz peeps

Scared Very Straight is the 20th episode of Season 4 of Beverly Hills, 90210.

Jesse meets Andrea's grandmother; Dylan's cool head helps when the heat's on David, who's left holding the bag when his dealer is busted; Brandon keeps his Valentine a secret, while Brenda's is kept secret from her.

Brandon, anything more than a friendship might be too much for me to handle right now
—Lucinda

Yeah, she's the type of woman who talks about principle, and then runs away with your boyfriend
—Donna to Kelly about Lucinda

You know, Brandon, you're the closest thing Andrea has to a brother
—Jesse in denial

I was standing on a ledge that day, man, my closest friends were trying to help me. And for what it's worth, you're the reason I didn't jump
—Dylan to David

Good for Andrea. She's definitely not your average co-ed
—Lucinda to Brandon 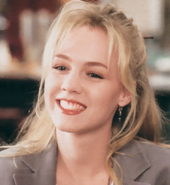 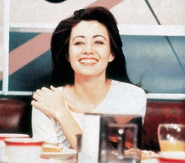 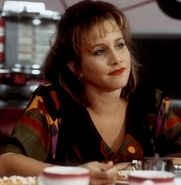 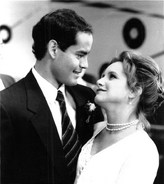