Charles Braverman
Slumber Party is the 13th episode of of Season 1 of Beverly Hills, 90210.

Kelly's friend brings an attitude to Brenda's girls' night in. Meanwhile, Steve and Brandon walk a lonely road on a night out with two unpredictable women.

Brenda invites Kelly, Donna and Andrea over for a "night of female bonding". They are having a fab time until Kelly's mean friend Amanda shows up. She insults everyone and decides to turn the girls against each other. As part of a "game" about secrets, Amanda bullies Kelly into describing her first sexual encounter, in which she was humiliated by the football captain. After Brenda recalls stealing a Minnesota friend's boyfriend, Kelly admits that she tried to hit on Dylan but was brutally rebuffed and Brenda is livid with her now former BFF.

The girls eventually make up, and Brenda and Kelly vow to never let a man come between them. Amanda's behavior is discovered to be the result of a diet pill addiction. The girls also catch David and Scott lurking outside the window of the Walsh house, taking pictures of them. Brandon and Steve are denied entry to a club, but hook up with two girls in the parking lot, who convince Steve to let them drive his Corvette alone. The conniving duo steal his car, but once it's found, he decides not to press charges (and pays their traffic ticket) because he foolishly thinks that he and Brandon might still have a chance with them.

I lost one best friend because of some stupid guy. I'm not gonna lose two
—Brenda to Kelly

Most guys would die to be in this room
—Brandon to Brenda, when he comes home

Jennie Garth – I can remember my first story line where I got to actually act: the slumber party scene where I had to tell a deep, dark secret to all my girlfriends. And I had to describe a situation where my character had been raped. I hadn’t had any formal acting training or anything, I was just working off my instincts, and I tapped into something for me that was like, “Oh, my God, maybe I am an actress. Maybe I can do this
Darren Star – I was in the editing room, watching the slumber-party episode. They’re all revealing their secrets, and Jennie Garth has this monologue. I thought, “If I were a teenager and saw that, I would have to watch this[1] 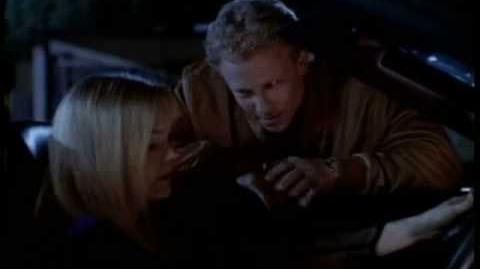