1 year (they have recently broken up in the Pilot)

Steve told people that they had slept together

Acrimonious at first, the two are forced to spend time together through their respective friendships with the Walsh twins and eventually become close friends.

Steve & Kelly is a relationship on Beverly Hills, 90210, portrayed by Ian Ziering and Jennie Garth.

Steve relays to Brandon that he and Kelly dated and that he broke up with her, while Kelly tells Brenda that Steve is her ex and that he 'doesn't get the message that it's o-v-e-r'[2]. Both are quite agitated with one another; Kelly because Steve told people that they had sex, Steve because he's upset that the relationship ended. Throughout their sophomore year they both act somewhat antagonistic, yet fiery toward one another, at times putting their respective friends, Brenda and Brandon, in awkward positions. However, over the course of their junior year they make peace with each other and become close friends. Although Kelly is shown to care deeply about Steve, she never chooses to start up a relationship with him again, despite most frequently seeming to have fun, be happy and feeling safe when she's around Steve, while Steve on a number of occasions wants to reconcile.

Steve and Kelly meet when they are around 5 years old and go to school together.[3] When starting West Beverly in 1989, they date their freshman year, during which Kelly's best friend at the time, Tiffany, makes a pass at Steve, resulting in Kelly ending her friendship with Tiffany.[4] Steve and Kelly share their first time having sex together, which happens at Steve's house. Kelly tells her friends that, on the night in question, Steve was subsequently interviewed by entertainment news about his famous mother, and that he couldn't hide the giant smile on his face through the whole interview.[5] After sleeping together, Steve talks about it around school which has Kelly break up with him. They presumably start dating almost immediately as incoming freshmen or even during the summer before, as Steve later mentions in a snide exchange between them that they were together for a year.[6]

Kelly – C'mon before he asks for alimony
Steve – Yeah, well, after a year with you, I deserve it![6]

After breaking up, Steve spends a lot of time agonising over the break-up in private, while badmouthing Kelly in public.[2] This is somewhat curbed by Brandon's presence in Steve's life, while Kelly is often seen annoyed with Steve, treating him as though he is beneath her, likely because of how hurt she was that he shared intimate details about their romance. In spite of this conflict, the two actually continuously flirt throughout their sophomore year, and even spend another night together.[7] Their respective friendships with Brenda and Brandon cause them to spend a lot of time together, mostly at the Walsh house, and this has a mediating effect on their conflict.

Kelly – Following me again?
Steve – In your sweetest, x-rated dreams[8]

Steve is interested in getting back together with Kelly, but mostly just teases her and she at times flirts back. When Kelly, Steve and Donna agree to stay at David Silver's grandparents home in Palm Springs, Steve decides it's time to make a direct move. He has a conversation with Kelly, where he professes his feelings for her, but she turns him down, saying she thinks they're better as friends.[9] Despite this, Steve still carries a torch for Kelly and the two continue to spar and banter flirtatiously. Although Kelly continually hits on Brandon, Steve doesn't seem much bothered and even makes out with Andrea, which Kelly and Brandon suspect, though never confirm.[10]

Steve does become jealous of Brandon when the Spring Dance rolls around and he asks Kelly, shocked to find that she's asked Brandon, and that he accepted. Brandon tries to curb the situation, but Steve gets drunk at the dance and reveals why he's angry with Kelly. He found out from his mother a year prior (on his birthday) that he was adopted and only shared the information with Kelly and he's hurt she hasn't paid any mind all night to his birthday or been a friend. Kelly and Steve talk about it and have a fight where Steve lashes out, but they both later apologise and make amends.[11]

Both Kelly and Steve spend their summer at the Beach Club, Steve playing volleyball and looking to meet girls, and Kelly sunbathing and looking to meet cute guys. When Kelly becomes interested in Kyle Conners, Steve gets actively jealous, to the point of being mean during a volleyball game against Kyle and Kelly, to which Kyle responds by knocking Steve over. Kelly knows Steve acts out because of jealousy and tries not to take it too seriously, until Steve makes horrible comments about her. Steve also badgers Kyle about whether he slept with Kelly. They make up and Steve later apologises.[12]

When David and Kelly's parents start dating, Kelly's mortified and seeks advice from Steve on how to handle it. Both Steve and Kelly are children of divorce and have had their share of step-parent experiences. Although it works out in the end, Kelly is glad to have help from Steve in the matter.[13] As the end of summer nears, Kelly and Steve commiserate over the impending return of school as they hang out at the Beach Club, joking around with each other. They later attend the Beach Club's end of summer luau.[14] Before school starts, the gang decide to go camping at Yosemite, but run afoul of stormy weather. While in a cold and leaking cabin, the gang encounter a newlywed couple, leading them to debate love and life. Kelly and Steve both mention soberly how young they were when their parents divorced.[15]

Steve and Kelly meet up at school, the first day of their junior year. Steve comments how a year prior, they wouldn't have been where they are now in their relationship, which seems to delight both of them, as Kelly teases Steve. New student Emily Valentine arrives and gets on well with the boys. Kelly gets a bit jealous when she sees Emily and Steve flirt.[16] When Brandon befriends a new girl who moved to the neighbourhood, Steve and Kelly tease Brandon about whether he likes her, in sort of a gossip-like fashion, both also creepily commenting on the fact that she's black. Brandon shoots back that they should consider getting back together.[17] Continuing their unfortunate partnering, Kelly and Steve give Donna a hard time when she's good at stocks in class. Despite Steve encouraging Donna to play the market for real, both he and Kelly call Donna stupid at various points. In the end, Donna wins big on the market and tells off both of them. Steve and Kelly decide they should ask Donna for stock advice.[18]

Kelly takes an interest in Brenda and Brandon's visitng cousin, Bobby, which makes Steve a bit jealous. When the gang attend a party at Tal Weaver's house, the guys help Bobby get up the stairs. When Bobby gets upset at watching Kelly dance with Tal, he wants to leave and Steve, his jealousy rearing its ugly head, tells off Kelly as if it's her fault.[19] One night, Steve meets a girl named Christine at the Peach Pit when they both go to pick a song from the jukebox. Christine has overheard Steve's name and introduces herself, saying she's a big Hartley House fan. Steve brings her to his house where they watch the show and kiss. They start dating, and a week later, they're on a date at the Peach Pit. Kelly is at a different table with Donna and watches in disgust, saying that Christine has no class. Donna doesn't take it that seriously and when Steve and Christine start kissing, Kelly leaves. At school, Steve is talking to the guys and Andrea about going to an R.E.M. concert with Christine that Saturday. Dylan says it sounds like a relationship is forming and Kelly interjects with her objections.

Look. All I'm gonna say is you get what you pay for
—Kelly to Steve and the others

Steve and Kelly start to bicker about it and Kelly says they should talk alone. The others motion to leave, but Steve is annoyed with Kelly and asks them to stay. Kelly basically calls Christine a prostitute and leaves. Steve's offended and Brandon says it's because she's jealous. Steve takes Christine to the concert anyway. When they run in to David afterwards, who got backstage, Christine gets petty about it and starts complaining. Steve offers her jewellery and suddenly she's fine. At school the next week, Steve talks about double date plans with Brenda and Dylan, and Kelly makes a spiteful comment. Steve tells her not to start, and leaves. Kelly then complains to the others that Steve likes anything in a skirt and didn't use to be like that, which they all seem to take as her being jealous. After Brenda fights with Steve over the same thing at their double date, Steve decides to test Christine and finds out that she knew who he was and intentionally sought him out for his wealth. Later, at the Peach Pit, the gang celebrate that Andrea doesn't have to leave West Beverly, while Steve sits alone at the counter, upset. Kelly comes over and he says he's sorry he didn't listen to her, which she echoes. He tries to give her the gift he bought for Christine, but Kelly rejects it because he bought it for someone else. She offers to cheer Steve up going to the cinema and they banter about which genre to watch, then leave together, laughing, while the gang looks on, surprised.[20]

No matter who or what you find out there, we'll always be your family
—Kelly to Steve[src]

Steve – A dance without Kelly Taylor really isn't a dance at all
Kelly – Aw, thank you[21]

Kelly – You're gonna be there, right?
Steve – Wouldn't miss it for the world
―Kelly's 18th[src]

Kelly is the great love of my life. I'm gonna do everything in my power to win her over and you gotta help me
—Steve to Brandon[src]

About 20 feet from where we're sitting right now, right. The grunion were running, it's a full moon. And that night I was lucky enough to have Kelly Taylor in my arms
—Steve to Kelly[src]

TWD – Kelly and Dylan or Kelly and Brandon?
Rosin – I’ll always be partial to Kelly and Steve[23] 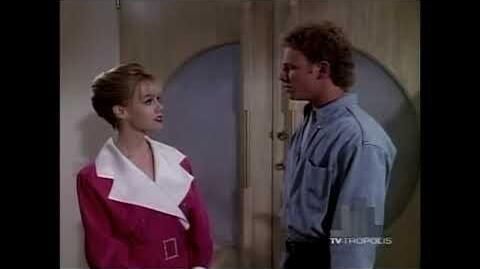