James Eckhouse[1]
Strangers In The Night is the 6th episode of Season 4 of Beverly Hills, 90210.

It's early morning Beverly Hills, with traffic streaming to work. Dylan gazes up at his Porsche on the hydraulic rack, awaiting the mechanic's verdict. His diagnosis is, "the car is getting old and should be handled more carefully." At the beach apartment, Kelly gets an early call from John Sears. Donna is anxious not to be late for class and is irritated with this delay. David says he's too exhausted to go to class. The radio job is taking its toll on him. Brenda is working at her father's office when Dylan rushes in to see Jim Walsh. Since he seems in a hurry Jim sees Dylan before his regular appointment with a client named Lawrence Carson. Dylan wants to buy a new "transportation" car and wants to be sure his check will be covered. Jim meets with Lawrence Carson. Carson recognizes Dylan, as Jack McKay's son, and says he hopes he doesn't follow in his father's footsteps. Over a game of ping-pong, Steve tells Brandon he has a frat meeting today. Donna mentions that she and Kelly get their sorority "pledge assignments" today. Brandon comments that it all sounds like "gobs" of fun. As the others leave, Brandon spots Andrea and asks her to get a bite to eat with him, but she says she's meeting Dan Rubin. Suddenly Brandon feels very lonely. In a quiet corner of the student union, Andrea and Dan are obviously enjoying each other's company. Dan asks what she would say if he kissed her. Andrea suggests that this is not the proper place, perhaps the dormitory would be more suitable.

At the Alpha Omega sorority house, pledge assignments are handed out to Donna and Kelly. They will package up used clothing and deliver it to a charity. At the dorm, Andrea and Dan are going hot and heavy until she insists on telling him she's still a virgin. He pulls back, saying that losing her virginity is a special thing and maybe they should hold off for now. Andrea is very confused by his reaction. Brenda arrives home exhausted from a very full day, starting with the job at her father's office, then classes, then studying. She says she'll probably never meet a suitable guy again. Jim suggests he arrange for a date with Larry Carson's twenty-four-year-old son, Stuart. Reluctantly, Brenda agrees but wonders if he will be some sort of geek. Andrea knocks at Dan Rubin's door and says she can't get him out of her mind. He invites her inside. Kelly is waiting on the sorority house porch surrounded by bags of used clothes. She is surprised to see John Sears drive up in the KEG fraternity van. John asks her if she is upset that he came. Kelly says she only wishes her life were less complicated. Andrea is completing her morning shower, when Brandon unexpectedly arrives with coffee and doughnuts. She invites him inside and finishes drying her hair. Brandon notices she seems to be in a sort of reverie. She wonders if her sexual experience with Dan is evident to anyone. She almost tells Brandon but then decides against it.

David still is in bed and in spite of Donna's coaxing, he finds it impossible to schedule his life around the late night radio job. Dylan is flipping through several auto magazines as Steve, Brandon and Kelly make suggestions about what car he should buy. Across the room, Donna tells Brenda what a couch potato David has become. Brenda says Donna is lucky to have someone. All she has is a blind date with a guy name Stuart. In Dan Rubin's class, Andrea feels a little self conscious but then tries to bury her feelings in the classroom work. Brandon, Steve and Kelly make the rounds of the pricey auto dealers with Dylan. It's a tense moment at the Walsh house as Brenda and everyone wait for Stuart Carson, her blind date, to arrive. Will Stuart be a dud they wonder. Their fears are put to rest when a very handsome, polite and sophisticated Stuart arrives. Brenda is overwhelmed as they drive away in his Mercedes. As Brandon is closing the front door, he sees Dylan drive up in a brand new Porsche 911 Turbo. Dylan says he just couldn't resist it. Jim Walsh is astounded at the price tag and confronts Dylan about wasting his money. Dylan gets angry and rushes off down the street in his new "toy." At a very elegant restaurant, Stuart orders Dom Perignon and Brenda tries to act as if this were the sort of place she had been to many times.

Kelly and Donna decide to lay down a set of strict house rules for David. From now on, he'll have to clean up any mess he makes, they say. During their superb dinner Brenda tells Stuart that her ex-boyfriend didn't take her to restaurants like this and they didn't have wine because he was a recovering alcoholic. After dinner, it's on to a night club in Beverly Hills where Stuart seems to know everyone and Brenda is delighted with his dancing skill. John calls Kelly and asks if she would like to go out with him but she says she has to study. Andrea is in Dan's room at the dormitory. After some heavy petting, she asks if he feels this relationship is right. She isn't comfortable having her English teacher as her lover, she says. He grins and suggests she change to a different teacher. Kelly is still in a friendly phone conversation with John, when the door bell rings. It's Dylan and he needs company. He feels a bit guilty about buying his expensive car, and wants someone to talk to. Kelly agrees to go for a ride with him and then remembers that John is holding on the line in the bedroom. As she hangs up the phone and joins Dylan she begins to wonder where her real affection lies.

Over her feeble protests that it's getting late and she has school tomorrow, Stuart escorts Brenda out on the dance floor for a slow romantic dance. David broadcasts a late night message in song to Donna, prefacing it with an apology for his sloppy habits. While the recording plays, one of the other late night employees drops in to say "hello." Bruno suggests David try a few of the tablets he offers, to help him keep awake. They're just caffeine, Bruno says, but if David needs something stronger, let him know. Brandon bumps into Jim Walsh in the kitchen having a late night snack and obviously a bit concerned that Brenda is still out on her date. Dylan brings Kelly home after a ride in his new Porsche. He says Jim Walsh is right that he doesn't need this expensive sports car. This car is for picking up girls and he already has one. Kelly declines his invitation to stay overnight at his house. Dylan asks her what's wrong and she answers that their social lives are veering off in different directions. She adds that maybe they should date other people when they want to, but still be friends, of course. Brenda arrives home. Standing close, she and Stuart kiss warmly and he asks “what she is doing for the rest of her life." Inside, Brenda tells her father, quietly and firmly, that even though she lives at home still, she is not a little girl anymore and can be trusted to make her own decisions. Jim nods in agreement, realizing that she is "all grown up" now. As Dylan drives his new Porsche down a deserted street he pulls to a stop at a red light. Out of nowhere, a man points a gun at Dylan and orders him out of the car. "You are carjacked, sucker!" he growls.

Jim – Wanna join me in a bowl of cereal?
Brandon – Why, Dad, I don't think we'd both fit

man on the moon | R.E.M.
Brandon and Steve face off in a ping pong game

sock it to ya! | DINO
stuart takes brenda to Falcone 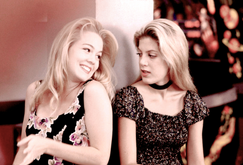 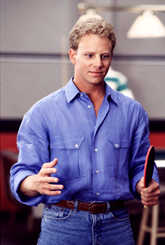 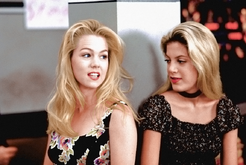 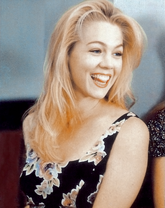 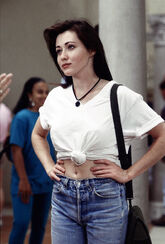 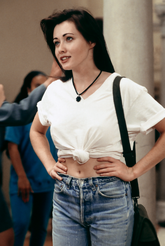 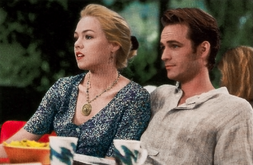 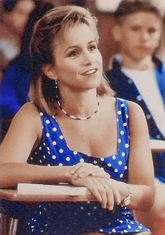 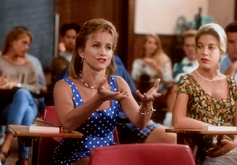 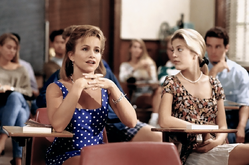 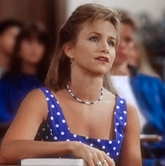 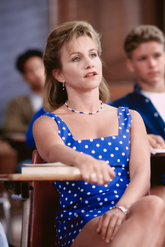 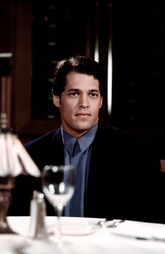