Take Back The Night

Take Back The Night

I don't believe that I'm about to encourage you to give Kelly a second chance, but, if that's what you want, Dylan, don't let stupid stuff stand in your way
—Brenda

Sears insults Kelly when she rejects his advances, but the incident pales in comparison with another student's story - which sounds like date rape. Meanwhile, Brandon is threatened by the hoopster he's tutoring; Brenda and Dylan disagree over a "romantic" poem.

At the student union, a large audience of mostly women are watching a film of "animal courtship" behavior as part of a week long program called "Take Back The Night." As various courtship rituals are displayed, Kelly and Donna compare their sexual relationships to those of the animals and birds. Lucinda Nicholson, Professor Randall's wife, is conducting this anthropological lecture. In the audience Brandon sits on the steps of the crowded theater with Cory Randall. Randall reminds Brandon of their dinner date tonight at his house. Brandon still feels awkward going to Cory and Lucinda's house, after their date. Brandon expresses concern about the student he is tutoring, and doubts that the basketball player will be able to maintain an acceptable grade average. At KEG house, the frat president warns the pledges that they must get at least a "C" average on the upcoming midterm tests. John Sears reminds Steve that Laura, his "blind date", keeps calling and he'd better call her back or tell her he's not interested. Laura calls again and Steve reluctantly takes the phone. In poetry class, Brenda realizes how far behind she's gotten by spending too many nights out on the town with Stuart. She begs Dylan to help her catch up before midterm exams. Steve meets Laura at the Peach Pit, intent on telling her they can't see each other any more because he has a steady girlfriend. Laura is not happy about this news and begins to cry, saying he just used her for a "one-night stand" and how he's dumping her. Steve feels terrible as she runs out of the restaurant. Dylan comes to the Walsh home for dinner and to coach Brenda in her class work. They comment that it is "reverse role playing" for the two of them. Brandon is dressed up in tie and jacket for the dinner at Professor Randall's house, but lacks much enthusiasm for this evening out.

At the Randalls' house, dinner is over and a few glasses of red wine helps contribute to a lively conversation about sports. Brandon helps Lucinda clear the table, while Randall gives D'Shawn a pep talk about his school work. Meanwhile, in the kitchen, Brandon tells Lucinda he can't believe her flirting with him right in front of her husband. Lucinda laughs, then asks Brandon if he has ever had sex on a kitchen table. A mind boggled Brandon makes a hasty retreat to join the others in the living room. At the KEG house, Celeste drops by to bring Steve a new jacket she's bought him with her employee's discount. John Sears starts bragging, when Kelly and Celeste are out of the room, about how tonight he is going to make it with Kelly. Steve finds this offensive. After reading the lines of a love poem, Brenda is baffled as to its meaning. Dylan says, "for a girl who nearly married a guy she hardly knew, it's hard to understand that she doesn't see a reflection of her own life in these lines." As Dylan reads the love poem again, Cindy and Jim overhear from the kitchen and panic, thinking Dylan is starting a new romance with Brenda. In a bedroom at the KEG house, Kelly begins to pull back from John Sears' intense kissing. He gets angry and she tells him she thought he was a sensitive, caring person, but she was obviously wrong. Kelly walks out leaving John Sears behind. Kelly goes to Dylan's house to tell him what happened. Dylan wants to go punch out Sears, but Kelly says she only told because she realized she has changed from her insecurities of a few years ago. As Dylan walks her to her car, she realizes he hasn't forgotten Sears forceful attitude toward his close friend. Dylan exchanges a few verbal barbs with John Sears outside the student union building and warns Sears to keep away from Kelly.

Kelly joins Steve as they enter the lecture on "date rape." She kids that she didn't expect to see him there, but Steve is more serious and cautions her about the type of guy that John Sears really is. Kelly says she's already broken off with John, and gives an appreciative kiss to Steve, for his caring. David tells Donna he's feeling very depressed because of this whole week of "male bashing" by the female students. David goes to his radio booth as Donna hurries to join Kelly, Brenda, Andrea, Dan Rubin, Laura and Leslie Sumner. Leslie announces to the gathering of students her concern about campus safety at night. Co-chairperson, Angela Rhodes, leads a discussion on "date rape." In the gym, Brandon is working out when Lucinda comes in. She starts flirting with him again and Brandon wonders if she's sincere or just gets her kicks tempting and teasing. Across the gym, D'Shawn watches and then turns away, apparently knowing what's going on. During the "date rape" seminar, the girls have broken into smaller groups and Kelly relates her attack at the Halloween party, two years ago. Then Brenda recounts her experience during the robbery at the Peach Pit. Andrea joins in by saying she feels the guys may be getting a "bum rap." Sometimes a woman invites problems by not taking precautions. Dan Rubin disagrees and they argue and when he tries to make up, she rebuffs him. As they are leaving the meeting, Laura buttonholes Kelly and appears to have a weighty problem. Kelly offers to meet and discuss it. In poetry class, Brenda and Dylan argue over a poem. Brenda says it is really advocating "date rape" but Dylan says it is about "giving love a chance." Laura tells Kelly that she was forced to have sex with a fraternity pledge last week. Kelly tells her she should report it, and perhaps announce at the rally tomorrow, warning other girls to beware of this guy.

In a tutoring session with Brandon, D'Shawn says he saw Lucinda Nicholson coming on to Brandon and he hints that he might blackmail him into taking the examination for him so he will get a passing grade. Brandon is stunned by this threat. Laura is meeting with Kelly, Leslie and Angela Rhodes. She is relating the whole story of her "date rape" but still not revealing the student's name. The girls are sympathetic and feel Laura must reveal the guy's name at the upcoming rally, to protect other girls. Kelly suspects that the attacker was John Sears, but Laura confesses it was Steve Sanders. Kelly can't believe this and tries to talk Laura out of revealing the name of the student publicly, until she's had a chance to talk to Steve. David asks to be relieved of his broadcast duties and the "Take Back The Night" rally. He feels the whole seminar has been very "anti-male" and has concentrated on "worst case scenarios." He finally gives in and agrees to cover the broadcast with Donna. Kelly goes to see Steve at the KEG frat house to try to find out the truth about his relationship with Laura. Steve tells Kelly that Laura encouraged him, even offered him a condom, and took off her own blouse. Kelly is not sure what to believe but knows this could cause Steve to be kicked out of college or worse. Steve talks to Laura on campus accusing her of being vindictive because he rejected her. He says if having sex with him was so terrible, why has she been phoning him day and night. Brenda and Dylan discuss Kelly's breakup with John Sears. He doesn't believe Kelly will stay away from him, for long. Steve meets with Celeste to tell her his side of the story. He confesses he did have sex with Laura, and this is what Celeste feared most to hear. She knew he would not rape a girl, but now she realizes he doesn't truly love her.

Steve goes to talk things over with Brandon. Brandon feels he did right to confess to Celeste, but he'll have to pay the penalty. Coincidentally, Brandon adds, Steve's in trouble for sleeping with someone and he's in trouble for rejecting Lucinda. Brandon visits D'Shawn's room and tells him to forget trying to force him to take the exams. Brandon says nothing has happened between him and Lucinda. D'Shawn is obviously desperate, and says unless Brandon helps him, his whole college sports life will come to an end and his future career is finished. An impressive parade crosses campus, with only a few hecklers on the sidelines led by John Sears. All of the group are in the march including Dylan, Brandon and Steve. Near the student union, the rally gathers and Angela Rhodes begins her speech, encouraging Laura and others to name names. Kelly grabs the microphone and relates the story of her own attempted "date rape" and then adds that she was rescued that terrible night by her friend, Steve Sanders. Quietly Laura slips away and disappears in the crowd, unwilling to pursue her lie any further. Steve finds Laura and extends his thanks to her for not ruining his life. At the refreshment stand, Dylan finds John Sears and after an exchange of words shoves a whole pie in his face. Brandon and Steve separate the two guys and Steve advises Sears not to make a further scene and embarrass the KEG house members. At the gym, Lucinda continues to tease Brandon. He tells her of D'Shawn's threats, but she laughs. She says her husband wants Brandon to take the test for D'Shawn. Brandon can't believe what he is hearing, and he walks away unable to answer her. At home, Brandon loads up his backpack for travel. He tells Brenda to tell his parents he's got to get away for awhile, to clear his thinking. He adds that "it's about to hit the fan on campus" and he doesn't want to be around when it happens.

C'mon I was there I know what you're really about! What you think I'm hanging around with you for your brilliant freshman repartee?
—The creep in its natural habitat

Steve – You mean you already know he's, like, a state reptile?
Kelly – Yes and it should be stamped on his forehead

Dylan – I think she was great. But did she actually say she wishes there were more people like Steve?
Brenda – Ooh what a concept 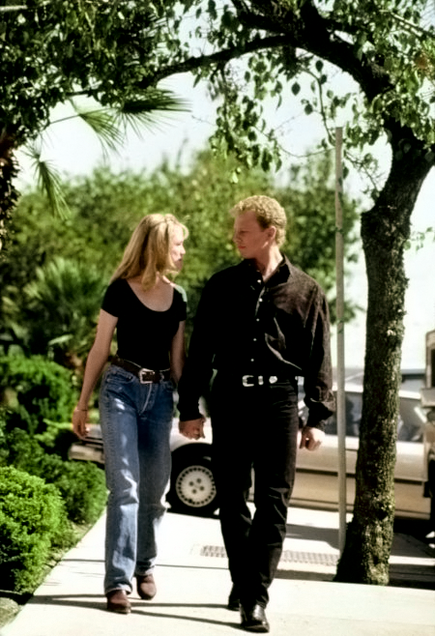 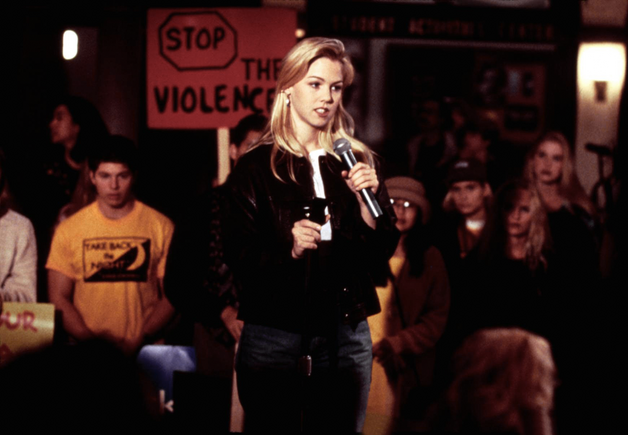 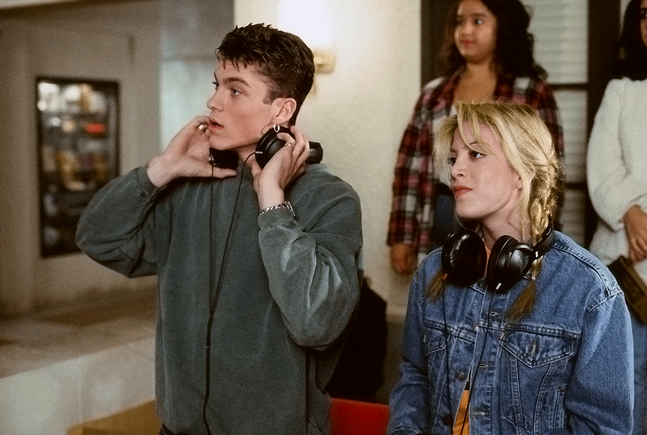