The Game Is Chicken

The Game Is Chicken

Jack Bender
The Game Is Chicken is the 17th episode of Season 3 of Beverly Hills, 90210.

Quick money in hot-rod racing attracts Steve and Brandon, but Dylan fears they'll be taken for a ride; Brenda and Kelly look to Princeton men to ease their Dylan dilemma; Donna proves a sound replacement for deejay David.

Steve is rushing to his early morning detention class. He barely makes it on time and the teacher warns him about his lateness. A student taunts Steve with remarks about his mother's television show. The student, named Joe, has put a gooey chocolate brownie in Steve's chair, but Steve dares not cause a ruckus and tries to control his temper. Andrea tells Brandon she's been attending hypnotherapy sessions in order to recall the identity of the driver of the car that hit her. She only has a fleeting remembrance of the accident but hopes to get the "hit and run" driver arrested. She can only recall a silvery star emblem of some sort. Because of David doubling on courses, he can't spend as much time in his D.J. booth playing music. Donna volunteers to help out. Dylan complains to Brandon of his frustration, now that Brenda and Kelly are forcing him to make a choice between the two of them. Dylan's tells Steve that his arch nemeses, Joe, is a longtime "detention inmate." Brenda and Kelly are bemoaning their standoff with Dylan. Cindy suggests they bring things to a head by making Dylan jealous. She tells them a friend of hers has a son who goes to Princeton and he has a friend visiting. They would be a great double date for Brenda and Kelly. The girls are excited about dating two college boys.

At school, Donna begins her new job as D.J. rather nervously, but soon begins to loosen up and receives praise from all her friends. Steve finds himself the butt of another practical job when his Corvette is stuffed with half a dozen live chickens. Joe appears on the scene telling Steve it was only a joke. He shows Steve his own suped-up hot rod car and Steve is very intrigued. Joe offers to show him how fast the car will race on the straight away from a dead stop. Brandon goes with Steve to see Joe's car drag race with another supped-up car. Joe says he's sure he can beat the other car. He asks Steve to lend him one hundred dollars. When he wins the race he'll pay Steve back double his money. Brandon gets caught up in the wager too, not realizing they are being set up in a con game. Of course, Joe's car easily out-distances the other car. Steve and Brandon are hooked on this apparently easy way to make money and are anxious about the next race. At the Peach Pit, Dylan warns Steve and Brandon that Joe and his friends are scammers and they had better watch out. Andrea overhears and is surprised that Brandon would be involved with drag racing on the streets, after she was almost killed by a drag stripper. At school, Joe tells Steve about the next car race with faster cars and bigger bets. Steve is hesitant to get involved in putting up any money, after what Dylan told him, but he is tempted.

Donna is getting a bit carried away with the D.J. job and David is getting worried. Joe talks to Brandon about the upcoming drag race. Brandon doesn't have any money to be a 'backer," but he promises to talk to Steve. Brenda and Kelly, still peeved at Dylan's lack of decision, decide to double date the fellows from Princeton, to make him jealous. Brandon tells Steve he can scrap together one hundred if Steve will come up with the rest of the fifteen hundred dollars. Dylan warns them again. When Dylan hears the other driver is Frank Padilla, a drug dealer, he says they have got to be crazy to be mixed up in this. Kelly and Brenda are anxiously awaiting the arrival of their blind dates from Princeton. The front door opens to reveal two extremely nerdy guys. They attend Princeton School in the Valley, not the Ivy League College. Too late to back out now, Brenda and Kelly are stuck with their blind dates. The drag race is about to start and Brandon and Steve have met Frank Padilla. He is very intimidating. Kelly and Brenda find their blind dates are right out of their worst nightmares. Wayne and Adam are totally involved in video games as the girls stand idly watching, wondering why they got all dressed up for this evening on the town.

Brandon and Steve took over the competition car, a silver Chevy. Suddenly, Brandon notices an ornament hanging from the rear view mirror, a cluster of glitter-coated stars. He remembers Andrea saying something about star ornaments on the car that smashed into her in the crosswalk. Brandon goes to notify the police and get Andrea to do an ID on the car. Steve tries to stall the start of the race. As a last minute stall, Steve demands that he drive Joe's car in the race, since he's backing it with his money. Joe doesn't like this idea. It upsets his plans and Padilla's getting very impatient. The blind date with the two nerds goes on at the fun arcade with Kelly and Brenda trying to make the best of it. When Frank Padilla continues to make disparaging remarks about Steve's mother they almost come to blows. Frank challenges Steve to a "game of chicken" with both cars racing toward each other. The first car to swerve is the loser, he says. Steve agrees, as he climbs into his Corvette and jerks his car into gear. Kelly and Brenda are wishing they'd never decided to do this blind date stunt to make Dylan jealous. Suppose he turns them both down, they speculate.

At the drag strip, Dylan arrives in his Porsche. The two racers are speeding toward each other. Dylan guns his Porsche and cuts across in front of the two racing cars. At the last minute Padilla swerves and skids to a stop avoiding a collision. Police cars arrive along with Brandon and Andrea. Andrea identifies the silver Chevy with the star ornaments. The police arrest Frank Padilla as the hit and run driver that caused Andrea's injuries. The group gathers at the Peach Pit as Kelly and Brenda arrives with their nerd dates. The girls bravely face the gang and introduce their dates from "Princeton." At school, David decides it would be good to have Donna join him as a D.J. host on the daily broadcast. Kelly and Brenda stick a two-shot photograph of themselves, taken at the fun arcade, on the door of Dylan's locker. This is to remind him he still must make a choice between the two of them.

So I was blitz shopping Melrose yesterday, and I see Jockey for her, Calvin Klein for her, BVD for her. Now I don't get it, I mean I don't see them making Maidenform for him
—Donna on the radio

Lately, between you and me, I've been thinking of how lucky Donna is to have David
—Kelly to Brenda

stand by me | BEN E. KING
dylan sees the photos on his locker and walks over to brenda and kelly 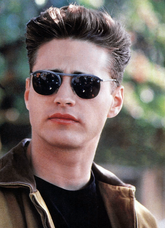 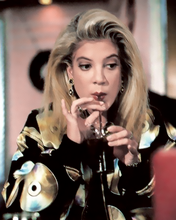 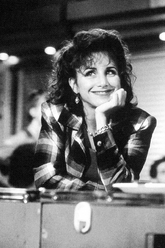 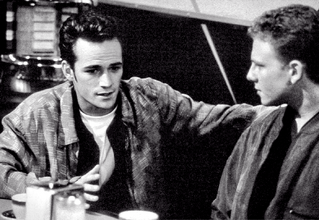 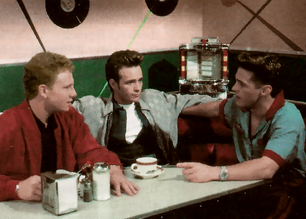 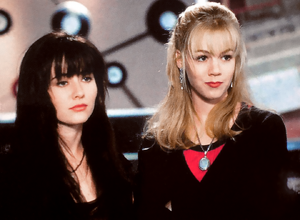 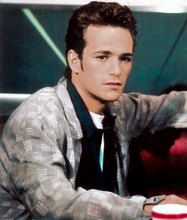 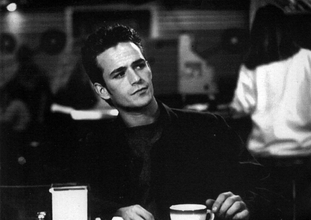 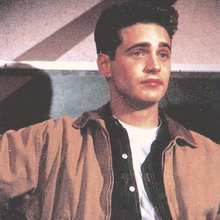 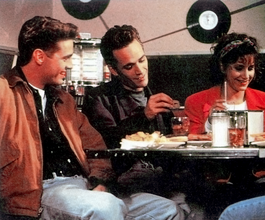 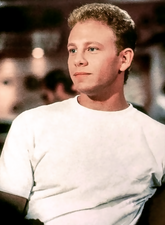 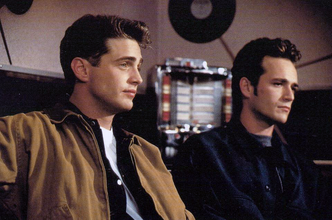 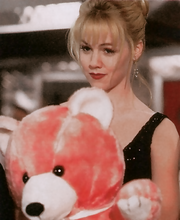 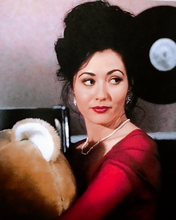 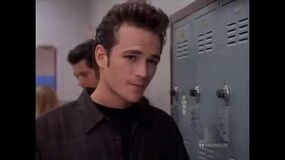 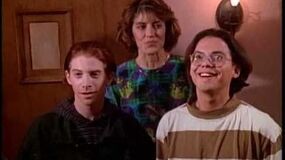 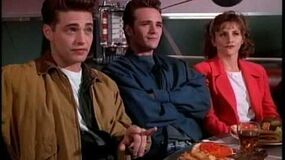