The Girl From New York City

The Girl
From New York City

I came out here to prove some kind of a point: to prove that I can make it on my own; that I didn't need to be in L.A. where Brandon was or where all my friends were. I wanted to be different; well it turns out I am different. Not just from my friends back home but from you and everyone else. And that's just the way it is
—Brenda to Darla

Brenda finds that more than the weather is inclement in Minnesota; Brandon learns why Jill (Robia LaMorte) wants to move slowly; Kelly tells Donna about her breakup with Dylan.

Brandon and Jill Flemming are in a heavy tennis match against Steve and Celeste. It has become a highly competitive match between Steve and Brandon, with Steve finally winning. In Brenda's empty bedroom, Cindy and Jim reminisce about their children's childhood and how quickly they have grown up. Cindy gets misty-eyed and moves close into Jim's comforting arms. In her campus dormitory room, Brenda is writing a letter to them, trying to sound cheerful, but it is a struggle. Outside the weather has turned cold and rainy. Brenda stares at her "California Dreaming" poster on the wall and sighs. Her roommate, Darla, comes in and tells Brenda she may want to use their room privately tonight with her boyfriend. "If there's a red tassel on the door knob, please don't barge in," she says.

At the beach house, Steve and Brandon discuss Jill. Steve can't believe Brandon hasn't slept with her yet. At their new apartment, Kelly and Donna are involved in an unaccustomed chore of cleaning the kitchen and bathroom. Donna's mother, Felice, is directing David in the living room, in how to place the furniture. Felice still doesn't know that David will be living there too. Jill and Brandon discuss her returning to New York in a few days. They both like each other, but Brandon can't seem to carry their relationship beyond a casual kiss. Dylan arrives back in town and shows up at the beach house. Steve and Brandon invite him to hang out with them but he says he has a couple of months of mail to sort through, at his house in town. He seems surprised when they tell him Kelly said she had a great time in Europe. Dylan says he is sorry he missed seeing Brenda before she left for college in Minnesota. We see Brenda, sitting outside her dormitory room waiting impatiently for her roommate Darla and her boyfriend to give the "all clear" signal.

Another highly competitive tennis match is in progress. This time Brandon and Jill are winning. At the Peach Pit, Andrea demonstrates to Nat her new skill in using a hypodermic syringe, with an orange. She has to start giving her grandmother daily shots of insulin for diabetes. Nat says he almost got into medicine but he couldn't stand the sight of blood. Dylan drops by to say hello. Andrea tells him Kelly, Donna and David have a beach apartment. He mentions that he was turned down by California-Berkeley. Outside Kelly and Donna are driving into the Peach Pit parking lot, when suddenly Kelly sees Dylan's Porsche. Kelly doesn't want to see him after what happened in Europe. She begins to tell Donna why she and Dylan had a big fight in France. She got bored and went back to Paris to shop. When she returned in a few days, Dylan had apparently begun a relationship with a beautiful French girl. An argument followed and to get back at Dylan, Kelly says she dated the cute bartender at the hotel. Returning from classes, Brenda again finds she can't get into her room, because Darla and her boyfriend are there. Later, Brenda tries to call Kelly and Donna at their apartment, but gets a recording.

The tennis match ends with Brandon and Jill winning and Steve has great difficulty accepting defeat gracefully. The angry mood also strains the Brandon/Jill relationship, but she apologizes to him. Steve cools down and offers to treat everybody to lunch. Brenda tells Darla she's not in the mood for the party downstairs. She asks Darla to "entertain" her boyfriend in his room, for a change. Donna tries to talk Kelly into calling Dylan but Kelly is hesitant. She's not sure Dylan will want to talk to her. She tells Donna about how she dated the French bartender and then told Dylan that Gaston was a great lover. They fought and Kelly stormed out and returned home. Brandon and Jill have a glass of wine and discuss their feelings for each other. Jill confesses that she was raped in New York, at knifepoint, about six months ago. She's been having difficulty adjusting to that traumatic experience. Now, for the first time in many months she feels comfortable being close to a man. Brandon holds her close and gently kisses her.

Andrea goes to see her grandmother's doctor to make sure she knows how to give the insulin shots correctly. The woman doctor tries to talk Andrea into studying for the medical profession. Donna is returning home to her apartment after having had a final dinner with her parents. Donna's mother decides to come up for a few minutes. Kelly tells David to hide in the bathroom. It would be difficult to explain his being at the girl's apartment at one in the morning. Later, David shows up in Donna's bedroom hoping she'll agree to a new and exciting sleeping arrangement, but Donna turns him down. It's morning and Brandon and Jill are waking up, having slept in each other's arms. Jill has to return to New York, but invites Brandon to come and visit her. When Brenda finds Darla and her boyfriend in the room again, she barges in anyway. Brenda goes to the closet to get her suitcase. She begins to pack up her things over the protest of Darla. Kelly finally works up the courage to go to see Dylan. She confesses to him that she did not sleep with Gaston. He tells her that he did not sleep with Brigitte, either. They move into each other's arms and kiss. David and Donna install a new hi-fi system and the gang drops by for a party. Back in Minnesota, Brenda hails a taxi and, with her bags, heads for the airport and back home to Los Angeles.

Kelly got on your nerves what a surprise
—Steve to Dylan

You wanna know something, you're right about one thing: with you out of the picture things were definitely a little more upbeat. And you know why? Cause I didn't have to listen to all your complaining and moaning, and finally I got some peace and quiet
—Dylan to Kelly

black cow | STEELY DAN
the guys, jill and celeste hang in the kitchen 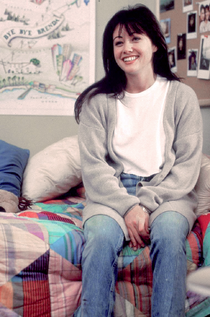 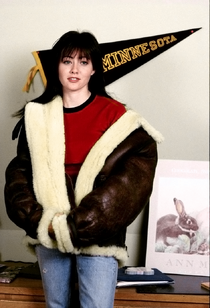 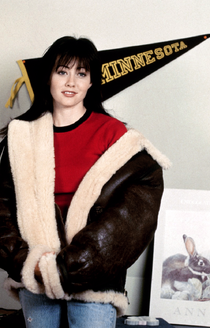 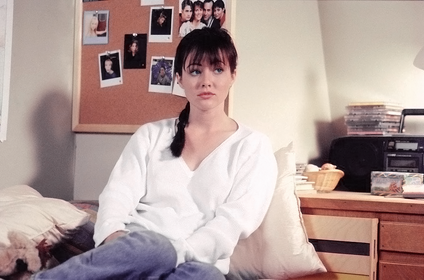