Grandma says I shouldn't be afraid to change my mind. To me, those are words to live by
—Brenda, to her family

College registration is too much for Dylan; David, Donna and Andrea try to continue their media activities; Steve talks up frat life to Brandon.

Brenda arrives back in Beverly Hills in the middle of the night, and surprises her family with the announcement she has dropped out of the University of Minnesota. It's registration day at California University. Long lines have formed in front of registration tables. Scattered about in the crowd are all of the gang, including Dylan. Brandon tells Andrea that Brenda is back in town and the word spreads quickly. Andrea tries to persuade him to join her in applying for the college newspaper staff, but Brandon says he has too many other problems at the moment. Dylan gets disgusted because several of the classes he selected are already filled. He tells Kelly he's changed his mind about registering. David is impatient to get through the lines, so he can apply for a position on the campus radio staff. Kelly telephones Brenda to ask why she's come home from Minnesota but Brenda tells her she'll have to call her later. Brenda is in a deep discussion with Jim and Cindy regarding her abrupt decision to leave Minnesota. She tells them she is not sure she wants to go to college, at all.

At a freshman student testing class, a number of young people are busy completing a quiz on mathematics. Steve is struggling and glances over to another freshman's test paper for some answers. Brandon whispers it's not for a "grade," just a placement test. Jim Walsh is surprised to find Dylan waiting at his office. He says he has decided not to go to college and to use his money doing what he really wants to do. Jim suspects he’s been talking to Brenda but Dylan is stunned to hear that she is back in town. Andrea, along with other hopeful freshmen, meets with the college newspaper editor and each is given a writing assignment to be completed by the next day. Andrea realizes she's just a "little fish in a big pond" now. Brandon tells Steve he's looking for a place to live near campus, now that Brenda is back. Steve suggests pledging a fraternity, but Brandon's not excited about that idea. David and Donna go to the Campus Radio Station for an interview, but start auditioning for the wrong person. Brenda tells Kelly, by phone, how embarrassed she is about being home from Minnesota after only two weeks. Donna gets on the phone to say she and David have a chance to have their broadcast demo tape heard. Brenda asks about Dylan and Kelly. Donna says they didn't break up like she thought.

At Dylan's house, Kelly talks excitedly to him about enrolling at college. Dylan says he's not going to enroll. He may just travel some more, he adds. Kelly argues that he should go to school, but Dylan gets angry. Kelly storms out, unable to cope with his attitude. Brandon tells Brenda it looks like the two of them will have to share the bathroom for awhile longer. Cindy reprimands Brenda for sleeping late, adding that she doesn't feel her daughter gave college a real chance. She should have stuck it out longer than two weeks. At the Peach Pit, Brenda finds Dylan in a booth having breakfast. They warm to each other immediately. They are both "instant college dropouts," they laugh. Kelly and Donna drop in to see Andrea's dormitory room, which is spacious and well equipped. A handsome, athletic type, named Dan Rubin, knocks. He is the dorm's Resident Advisor, he says. Andrea offers him one of the croissants that Donna brought, and is visibly impressed with the guy. Steve convinces Brandon he should at least attend the Kappa Epsilon Gamma open house. He may change his mind about pledging a fraternity, Steve adds. Donna tells David she'll take their broadcast audition tape to the campus radio station for him, since he has several school errands to do. Kelly tells Donna she is still hoping Dylan will change his mind about college.

At the Peach Pit, Dylan has just invited Brenda to spend the day with him, "doing nothing." Brenda is delighted with the idea. It's been a tense day for Nat with two of his staff out sick. Andrea drops by to do her first "restaurant review" assignment for the campus newspaper. Andrea tries to be fair in her review, but this is obviously the wrong day to come to the Pit. Donna leaves the audition tape in the glove compartment of her car, parked in the hot sun. The tape is warped and ruined. David tells Donna it was his only copy. Dylan and Brenda drive up the coast. On the pier, Dylan tells her how exciting Europe was for him. He wants to write about it some day. Brenda mentions how much she liked the historical places in Paris. He says Kelly was only interested in shopping when they were there. They rent a tackle box and try their luck at fishing. While trying to explain how the audition tape was ruined, David and Donna impress the student Program Director, with their "Stiller and Meara" routine. Brandon is surprised that Andrea has done such a "hatchet job" on the Peach Pit. She explains that she is desperate to get on the newspaper staff and she's written what she feels the editor will want to read. Both she and Brandon agree they're stressed out being thrown into this new collegiate environment. At the KEG fraternity, an elite group including Steve and Brandon, are being addressed by an officer of the fraternity. Dixon, a member, talks to Steve and Brandon about intra-mural sport - and their skills. The charities which the group supports are also mentioned. Brandon is becoming very impressed.

While attempting to bait their fishing hooks, Dylan and Brenda share a closeness they both have missed. Andrea tells the college newspaper editor she is not sure she has the "killer instinct" to be on the paper. He advises her, if she wants to succeed in journalism she'd better be on the newspaper staff. Andrea walks away saying, "there is always pre-med." Steve is told by his faculty advisor, that his math placement score was so high that they recommend he concentrate on astro-physics. Realizing that the answers he copied were from an obviously brilliant student who sat near him for the test, Steve tries to conceal his panic. He suggests that maybe he should "expand his knowledge in all directions" by taking other electives such as "film history or folklore." The counselor agrees and is impressed with Steve's adult attitude. Dylan and Brenda end their day together philosophizing about life and deciding that a college education is right for them after all. Donna and David rush home to tell Kelly that they've gotten on the campus radio staff - Brandon is asked by the college newspaper editor, Ken Richland, to run for the student senate. Ken has heard about Brandon organizing the student protest at West Beverly. Dylan stops by the beach apartment to tell Kelly he's decided to register for college. He's been with Brenda all day but they're just good friends, he adds. Brenda surprises her parents by announcing she's going to enroll in college at California University. Jim and Cindy are obviously elated to hear the news.

earth angel | THE PENGUINS
brenda and dylan leave for adventure 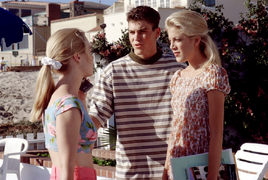 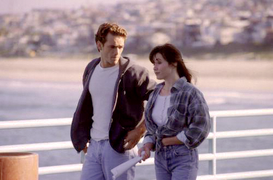 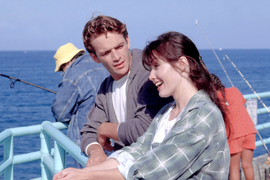 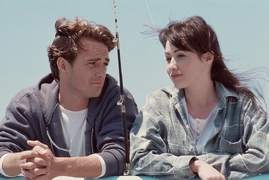 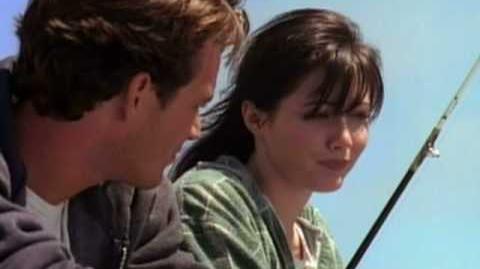