The Twins, The Trustee And The Very Big Trip

The Twins, The Trustee And The Very Big Trip

This is different. Brenda and Dylan are living together. They're making a statement. A beautiful statement
—Kelly, to Brenda and Donna

The Twins, the Trustee, And The Very Big Trip is the 2nd episode of Season 3 of Beverly Hills, 90210.

Kelly's sudden embrace of family values leads to a bridging of the gap between Brenda and her parents, but not before Jim plays hardball with Dylan; and twins turn the tables on a thoughtless Steve.

David and Kelly are at the hospital to see the new baby. David is video taping the infant. Jim and Cindy Walsh are getting up. Jim is in a foul mood, still upset over the fact that Brenda is living at Dylan's house. Cindy advises him that threatening a lawsuit isn't going to bring the family together again. Brenda is running the vacuum cleaner at Dylan's house. Dylan is not at his best sop early in the morning. They discuss where he is going and when he'll return. She tells him to pick up laundry detergent and something for dinner. Dylan is not sure he is ready for this new arrangement. At the Beach Club, Steve meets a cute girt named Rorie. David, Kelly and Donna are talking about Donna's Paris trip. She's already homesick. Cindy Walsh shows up and joins them. Brandon shows a cute girl to her cabana and they obviously like each other immediately. Steve tells Brandon he's met a great looking girl. He points her out to Brandon. Brandon think she's the same girl he just met but then they see that Rorie has a twin sister. Steve suggests that they double date. Andrea stops Brandon to tell him how her day went with the young kids. She's still enjoying her job. Cindy asks Brandon to stop by Dylan's house and see how Brenda is getting along. Kelly is a bit shocked to see her mother nursing the new baby, but warms up to the infant and asks to hold her. Brenda and Dylan are eating the burritos he brought home. Brandon arrives for a visit. Brandon suspects the living arrangement is not quite perfect. He relays this to Jim and Cindy Walsh. Kelly gets up during the night to check on her baby sister Erin, showing a new maternal quality to her personality. Kelly tells her mother she does not want to go to Paris this summer.

Steve suggests that he and Brandon switch their twin dates. He'll date Claire and let Brandon date Rorie. Kelly and Donna visit Brenda. They find Brenda less than cheerful. Kelly tells them she has decided not to go to Paris. She finds the new baby Erin more exciting than going on a trip. Donna suggests that Brenda go instead. Dylan confesses to Brandon that his togetherness with Brenda is not quite what he hoped it would be. She's trying too hard to make it work out. Brenda stops by the Walsh house to tell Cindy everything is fine with her new living arrangement with Dylan. Cindy detects a bit of homesickness in Brenda. They discuss the fact that Kelly has cancelled out on the Paris trip. Brandon and Steve have switched dates for the day. Claire with Brandon and Rorie is with Steve. Cindy tells Jim that Brenda came by the house. He says she should have locked her in while she was there. Brenda tells Dylan that she visited her parent's house and it has left her feeling a bit sad. A letter comes to Dylan informing him that his trust account is to be frozen and he has to appear at Jim Walsh's office the next day.

Steve and Brandon continue their plans for changing their "twin dates." Kelly phones Brenda telling her how much she enjoys her new baby sister, Erin. Dylan meets with Jim Walsh, who mentions to him that he may be violating the California law by co-habitating with a minor, namely, Brenda. Dylan reminds Jim it isn't his fault that Jim can not communicate with his daughter. Jim says he and Cindy have decided to send Brenda to Paris. The twins pull a switch on Steve and Brandon, each pretending to be the other. Steve has been "outfoxed" again. Dylan and Brenda go to the Walsh house for dinner, Brenda is reluctant but finally agrees. Steve is confessing to Rorie, thinking she is her twin, Claire, that he and Rorie just aren't right for each other. He found Rorie boring, he says. Rorie tells him she’s Rorie, not her sister Claire. Jim and Cindy tell Brenda they are treating her to a trip to Paris. Brenda thinks it’s just a trick to keep her from Dylan, but Dylan speaks up in support of the Paris trip. Cindy reminds Brenda that she always regretted turning down an opportunity she had to study in Paris. Dylan tells Jim Walsh he went along with the idea of the Paris trip because it really is best for Brenda. Brandon jokingly tells Steve that maybe he should throw tantrums, get drunk and such. Maybe he would get sent to Paris too. The girls arrive, with suitcases, on the way to the airport for the Walsh going away party at the Beach Club. Everyone is on hand to see them off on their trip.

Hey, I'm sorry, even on good days I can be a bear in the morning. But I do love you, you know that
—Dylan's not hungry

Dylan – It is not my fault that you can't communicate with your daughter
Jim – You're right. It's not your fault – it's your problem
―Legal action 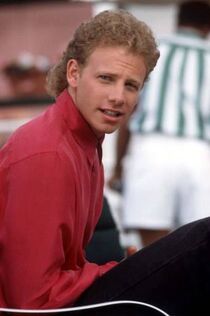 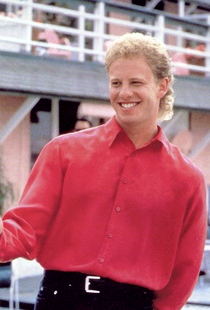 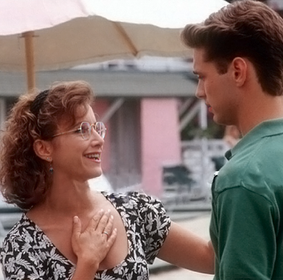 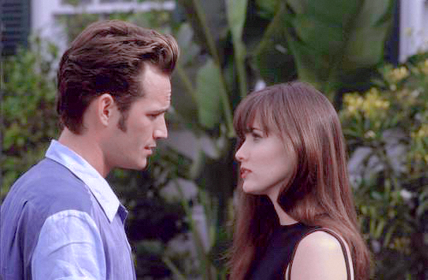 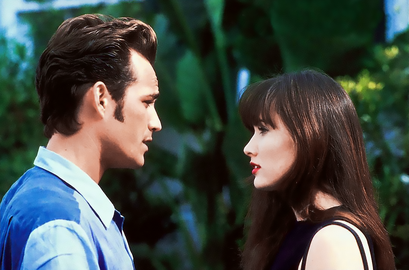 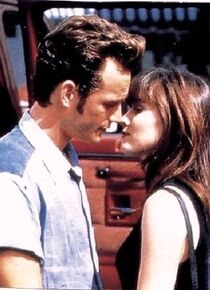 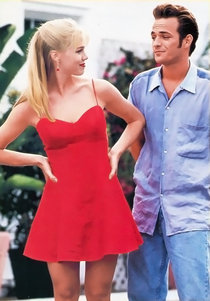 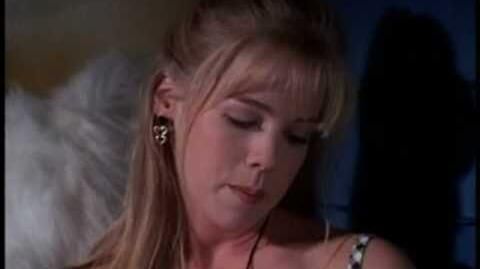