Dylan's father asks a final favor; Brenda and Donna get a dim intro to the City of Light; an old friend tries, but it's a new who gives pause to Andrea when her Republican romance may go all the way - to the convention in Houston.

Brandon is hanging out with Andrea’s kids at the beach club, getting buried in the sand when he notices a deaf boy sitting with his mother nearby. Henry sends Brandon back to work, but no one will help him get out of the sand. He tries to make plans with Andrea for that evening, but he’s too late to distract her from Jay. Steve shows Brandon the front page of the paper, which mentions Dylan’s father being up for parole. Dylan is already at the prison ready to meet with his father before his parole hearing. Jack asks Dylan to write a letter talking about how awesome his dad is. Dylan’s hesitant to do it, so Jack guilts him into agreeing. Brenda & Donna arrive in Paris and Donna is annoyed by all the smoking in the city; she tries to get Brenda to lecture their cab driver about it and the driver ends up kicking them out of the cab. The girls check into their hotel, where they get a bare room with a view of a brick wall and hardly any place for their clothes. They meet three of their fellow classmates, who are not quite friendly. Brenda begs Donna not to call David, thinking that she’ll get homesick.

Andrea has dinner with Jay, who is about to go to Houston for the Republican National Convention. He offers to get Andrea a spot on the trip, and she says she’ll get to “smoke out the enemy.” Andrea is shocked to learn that Jay is a Republican, and Jay is shocked to learn that Andrea is a Democrat. Then, they make out in public. The next day, Andrea (who happens to know some sign language), meets the deaf boy, Cameron, and invites him to the kids’ camp, but his mother doesn’t think it’s a good idea. Brenda and Donna do the tourist thing in Paris, but Donna is obviously not happy. Brenda finally calls her on it, saying that she’s going to take advantage of the immersion experience to actually immerse herself in the culture. Jay visits Andrea at work and tells her she can come to the convention. Brandon sees them hugging and looks sad. Later, Andrea and Jay make out and Steve tells Brandon that she’s trying to make him jealous. He encourages Brandon to make a move before it’s too late.

Cameron comes to hang out with Andrea’s kids, telling her that his mother gave him permission, but it turns out to be a lie and Cameron's mother isn’t happy about him wandering off. She also doesn’t think Andrea would be able to keep an eye on Cameron while she's also watching the other kids. Andrea convinces Cameron's mother to let him spend one day with the kids just to try it out. Donna and Brenda go out to a fancy restaurant and Brenda lectures Donna about making sure none of the locals takes advantage of their naivety. Brandon infiltrates a water-balloon toss and gets all the kids to throw their balloons at Andrea. They talk about the convention, which Andrea’s allowed to leave her job to attend. Brandon notes that Andrea's dumping Cameron to go and Andrea is mad at him for trying to make her feel guilty. Brenda thinks she “can’t accept the idea of [her] own independence” and part of the reason she came to Paris was to show that she’s in charge of her life, and Jim & Dylan aren’t. The girls are unimpressed with their dinner, which was supposed to be veal, but it turns out to be brains.

Kelly finds Dylan at the beach club trying to write his letter for his father’s hearing. She tells him she and Jake are through. Dylan says he warned Jake not to mess with her, but Kelly says she was the one who got too interested. The two of them reminisce about being in the same kindergarten class. Dylan laments that he can’t come up with anything nice to say about Jack, so Kelly tells him that he might as well lie. Brandon catches Andrea on her way to a date with Jay and tells her how much he’ll miss seeing her while she’s in Houston. Brandon kisses Andrea, which leaves her stunned. She thinks he’s only interested because she’s with Jay. She asks where he’s been over the last couple of years while she was pining for him. The next day, Brandon complains to Steve about wanting a girl he can’t have. He apologizes to Andrea for what she saw as an insult with his kiss. Andrea assures him that they’ll always be friends. After their first day of classes, Brenda and Donna get ready for a night out together. Donna makes it clear that she won’t be picking up any guys. Brenda misses Dylan, too, but she is not obsessing over him like Donna is over David.

The girls go out with some fellow students to what’s probably supposed to be a party, but looks more like a gallery opening. Donna’s happy to finally get some good food. A guy hits on Brenda, who tells him she sleeps with Donna. Then, she thinks she sees Dylan. But the real Dylan is on his way to prison for the parole hearing. Jack is happy with Dylan’s letter, but Dylan tells him that it's not completely factual and Jack accuses him of having a selective memory. Then, they quote the book "Green Eggs and Ham" to each other, which apparently proves that Jack taught Dylan to read. Back in Paris, Donna is now happy, but Brenda isn't. She wishes that Dylan were there to see the romantic city with her. She also wants to be a whole person with lots of different interests. Donna confides that she’s glad Brenda came instead of Kelly. Cameron’s mom thanks Andrea for helping her son have such a great summer and is sad that Andrea won’t be there for the rest of it.

Dylan meets up with Kelly, who tells him that she’s sorry that Jack didn’t get paroled. They talk about Brenda and how far away she seems. Dylan decided not to bring Kelly down with the news of his father. He and Kelly admit that they are not as miserable as they expected to be with Brenda gone. Brandon watches Andrea say goodbye to Cameron. Andrea decides to stay in Beverly Hills. Cameron needs her more than Jay and the Republican party do. Later, Jay tells Andrea that this is probably their last chance to be together since he will be heading to school right after he comes back from Houston. Andrea and Jay agree to try a long-distance relationship. Jay is happy that Andrea’s staying for Cameron, not Brandon, and makes sure that’s really the case.

You never seize to amaze me
—Brandon to Andrea

? | ?
Brenda and Donna attend a party in Paris 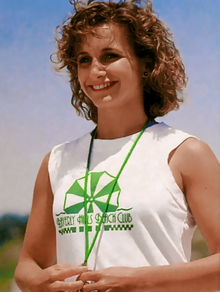 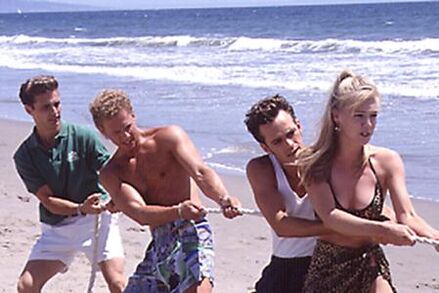