Wedding Bell Blues is the 28th episode and finale of Season 2 of Beverly Hills, 90210.

Conclusion. Mount Jimbo erupts, banning Dylan from the Walsh home, which is suddenly the site for the wedding of Mel and Jackie. Meanwhile, Kelly mourns the departure of Jake.

After being summoned to the Mexican border to verify Brenda’s American citizenship, Jim Walsh forbids Dylan to see Brenda. Despite Dylan’s attempts to regain Jim’s trust, they have a heated confrontation at Jackie Taylor and Mel Silver’s wedding. Dylan storms out, leaving a distressed Brenda behind. Meanwhile, Kelly tries to convince Jake that the difference in their ages should not affect their true feelings for one another. She tries to persuade him to escort her to her mother’s wedding.

Brenda – How can you compare your problems with Jake who you barely even know to my problems with Dylan?! I mean you're not even up there with Donna and David!
Donna – What's that supposed to mean?
Kelly – That means that Brenda's being a self-centered little b****
―Fun times

My fault alright. I just got too close to all of you — I won't make that mistake again
—Dylan to Brenda

bye bye love | THE EVERLY BROTHERS
kelly, donna and david come into the Peach Pit and tell Brandon about the wedding woes 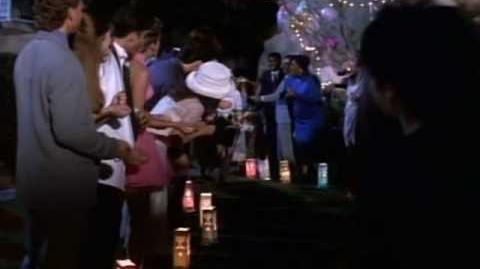