You Say Goodbye, I Say Hello

You Say Goodbye, I Say Hello

Michael Lange
You Say Goodbye, I Say Hello is the 7th episode of Season 9 of Beverly Hills, 90210.

Executive producer Aaron Spelling called it "a very significant, happy day" when Luke Perry was signed to return to 90210 --- a homecoming that happens tonight. Perry, who says his feature-film experience has enriched his sense of the character, says there's "a lot [he] wanted to do with Dylan"; he'll have plenty of opportunity, beginning with Dylan's surprise arrival on Thanksgiving Day, which naturally flusters Kelly. Former General Hospital star Vanessa Marcil also joins the cast tonight as Donna's cousin Gina, a professional ice skater whose career, unbeknownst to Donna, is on the skids. Meanwhile, David and Noah are each involved in separate matters with the police.

Arrivals and departures, near disasters and brewing calamities, relationships tested and re-formed...all are swirling through the Thanksgiving holiday for the gang and its members. The "goodbye" of the episode title is applicable to Valerie Malone. Seems Val wrote Brandon a letter advising him not to marry Kelly. Unfortunately for Val, Kelly found the note when they were sorting through Brandon's remaining items (destined for his new place in D.C.) and Kelly is furious at Val over this. Donna and David are both stern with Val about how awful the letter was, but when David learns Kelly arranged to ruin Val's plans to host Thanksgiving, he clues her in about the sexual abuse and self-defence killings that left Val a ruined person. Kelly attempts to mend bridges with Val, and when everyone somehow does show up at Casa Walsh for Thanksgiving dinner, the longtime enemies declare a truce. But Val has something else to tell everyone: she's accepted her mother's offer to return to Buffalo and work through their traumas together, and she's flying out tonight. David sees her off with a bittersweet kiss and hug. The "hello" has two people attached to it, one a newcomer and one not so much. The former is one Gina Kincaid, Donna's poor cousin who became a star ice skater. Alas, Gina has become a has-been working at an ice cabaret show where her angry attitude leads to her getting fired and having her agent axe her as a client. Gina lies about her reality to Donna and her friends, and doesn't really get to interact much with anyone.

The latter is Dylan McKay, who turns up for Thanksgiving dinner and is greeted with universal happiness. Only thing is, Kelly has become romantically interested in good-guy attorney Matt Durning, and having Dylan back in town is a huge surprise to her. Noah's near disaster involves his continued and unapologetic drinking, leading to him driving drunk and smashing into something with his car. He's deathly afraid he hit a kid on a bike and left him on life support, and Donna finally tells him off when she sees he's still drinking afterwards. Noah goes to the police and confesses to what he thinks he did, but later learns he only hit a dumpster (the real criminal was a woman in Pasadena who got arrested) and tells Donna she was right and he's going to combat his problem seriously going forward. David, who clearly misses Sophie, has a blonde woman appear at his show and he sleeps with her. Problem is, she's a teenager who used a fake ID and is actually just 17 years old, and she lets him know her parents want David prosecuted statutory rape. David goes to Matt for legal counsel and learns he's in a LOT of trouble. And while Steve is eager to be Janet's boyfriend after their ghost story hook-up, Janet simply wants them to be "bed buddies". A story in their newly tabloided Beverly Beat about a long-married couple where the wife is allergic to her husband inspires Steve to tell Janet he wants a real relationship with her, period. 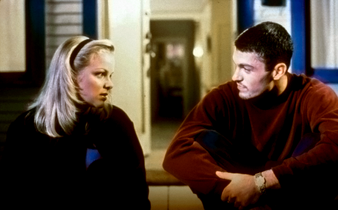 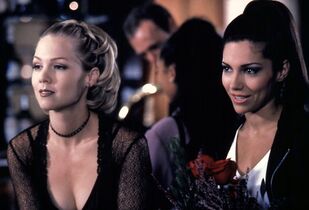 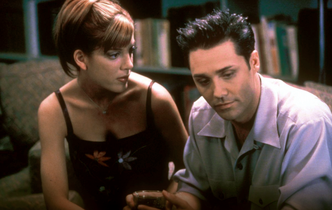 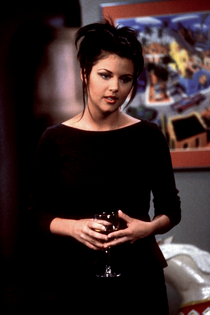 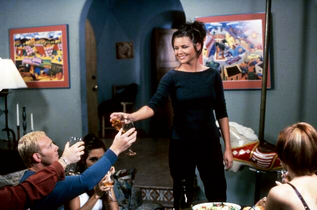 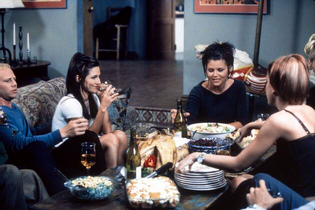