6
Zach is a recurring character on BH90210, portrayed by Ty Wood.

Zach at first comes across as a seemingly nice guy who is a big fan of Beverly Hills, 90210. However, he seems to keep his true emotions well guarded, and appears to have an obsession with the cast of show. More specifically with Brian, which ultimately leads him to eventually work with him.

He is first seen at the reunion panel in Las Vegas telling Brian how he noticed that through Beverly Hills, 90210's run, David Silver was kind of the outsider of the group. He then asks Brian if he ever like that. Zach is next seen at the same shopping center as the rest of the gang. Tori comes to him asking him if he can record a live stream of her breaking the glass case keeping her prom dress on display. In the chaos, Brian loses his wallet and he's revealed to be in possession of it. Zach is next seen at Brian and Shay's home with said wallet, but doesn't end up returning it.[1]

As Shay and Brian make up after a fight they had over Shay overstepping, he is seen sitting in his car watching the two from a distance and presumably stalking Brian after he puts a picture of Brian's fight with Shay onto a board full of Brian-themed stuff. Later, Zach types an email to Brian's manager in which he applies to be his assistant.[2]

While getting interviewed by Brian Shay comes by, and Zach brushes her off. Not reacting to how she normally is treated. He admits that he’s not a top 40’s guy and Shay leaves the two guys as she goes back inside the house. Later that day, He takes the blame for the opened door that lead to Bryce getting out of the house. He is asked by Brian why he took the blame for Shay, and he tells her that his mom messed up way worse than Shay did. But that didn’t mean she didn’t love him any less. Brian rewards his good behavior by giving him the keys to his home so he can let himself in. [3]

He is next seen grabbing the drink order for Shay and Brian whom are waiting inside their limo. Zach overhears that Shay's song has leaked as he opens the door to give the two their smoothies. He tells Shay that he should talk to her stylist Joanna who was there late last night, and might have seen something. Shay hires a private investigator which clears Zach of being the one to leak her song. But since she didn't trust him, the private investigator she hired was also looking into him. Through the investigation Shay shows Brian footage from Zach at the reunion panel. When Brian keeps swiping, he finds out that the private investigator got into Zach’s apartment as well, and took pictures of Brian's missing wallet, and a board that had a younger Brian’s picture on it along with those of the rest of the Beverly Hills, 90210 cast. When Brian confronts Zach about it all, the latter confesses he wasn't planning to do anything bad. He just wanted to get to know his dad.[4]

After the bombshell Zach finds Brian at craft services and Brian apologizes for being radio silent for the past two days after finding out Zach is his son. He tells Zach he just needed a couple of days to process it all. When he asks Brian if Shay is pissed, he tells him that he hasn’t told her yet. He tells Zach that given the circumstances, it would be too weird to still have him as his assistant. Zach seems genuinely upset over this but tells him he had been expecting to be let go once the truth came out. But Brian then jokes that he can pull some strings around the zip code and get him a PA job on the set. He is next seen skating around with Brian and when asked by Brian how long he has been doing it, Zach says about a year.

He then jokes that he can do basic math, when Brian is telling him that he was a bit younger than Zach is now when he met his mom. Apparently his mom didn’t want to tell him much about Brian. He goes onto say that its a part of her life she’s closed off now. He reveals that his mom was an extra on Beverly Hills,90210, but she had come to LA thinking she’d be the next Julia Roberts. Brian then tells Zach that she raised a good kid, and tells him that if he ever wants to, that he can call him Dad. Zach however, is apprehensive on ever calling him Dad because he feels as though that time has passed. He asks Brian again if he has told anyone about him, and Brian admits he hasn’t. Zach then tells him that he doesn’t think he should. When Jason lashes out at Zach, Brian sticks up for his son, which Zach seems to appreciate. Later, Brian introduces Zach to the rest of the cast as his son, and Tori tells him "welcome to the family". He is last seen coming out of the lot with some co-workers and throwing out a water bottle he drank out of. A dark skinned man picks up the water bottle that Zach threw out and bags it.[5] 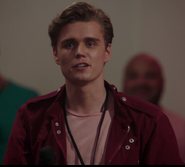 Asking a question at 30th Anniversary panel in The Reunion

Going to Brian's house in The Reunion

Zach's background in The Pitch